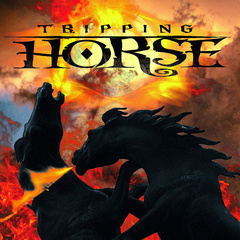 At a time in metal when style is often celebrated over substance and same-sounding bands are rewarded with hit albums, Tripping Horse, a provocatively named mixed-gender quartet from Austria arrives on our shores to give the hard rock scene a kick in the pants. Having drawn favorable critical comparisons to Stoner rock pioneers Kyuss and Queens of the Stone Age, acclaimed avante-metalists System of a Down and modern goth/metal bands like HIM and NYC’s Type O Negative, Tripping Horse seamlessly integrate their collective influences to create a fresh sound in aggressive rock that they simply call ‘Universal Metal.’ Like Vikings on a rampage, Tripping Horse is poised to unleash its ambitious self-titled debut CD on citizens of the US. Clearly, this band intends to take no prisoners.

The twelve songs on Tripping Horse feature fierce, layered guitars, propulsive drumming, an appealing balance of both melodic and aggressive vocal interplay and what can only be considered “non-traditional” instrumentation for a modern metal album. Elements of complimentary genres including punk rock, progressive metal and classical provide an aural testament to the diverse talents brought to the group dynamic by its four individual members. If you’ve longed to hear a CD that will stand out among the past few years’ acquisitions to your record collection, Tripping Horse could be the disc you’ve been waiting for.