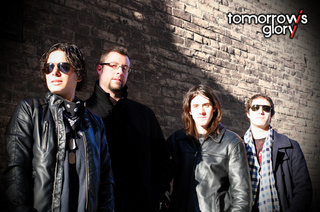 Together since mid 2008, Tomorrow’s Glory is an indie rock band from Toronto. Appearing on the band’s roster is Anthony Salvati (vocals, guitar), Jon MacMull (guitar), Nick Lemieux (bass) and Justin Zimmerman (drums). As each member comes from a different musical background, the band's energetic music reflects a variety of styles. They’ve been inspired by many bands, such as U2, the FooFighters, Moist, Weezer, Bon Jovi and more. An audience at a Tomorrow’s Glory show can pick out elements of grunge, metal, punk, and funk - on the whole, however, the band is said to have a “late 90’s” sound with a new alternative feel. Lyrically, their songs often carry a positive message - from finding the strength to walk away from an abusive relationship (“Walk Away”) to breaking free from oppressive ideological conformity (“Finding a Way”). Since its inception, the band has been invited to perform at a number of Toronto’s top indie rock venues - including The Horseshoe Tavern, The Opera House, The Reverb, Hard Rock Café and Lee’s Palace - often as the headlining band. In mid 2008, one of their earliest songs, “Take It All”, was played on Oshawa’s 94.9 The Rock Indie spotlight night. Their song "Trip" was put in regular rotation on Mohawk College Radio (101.5 FM) and most recently “Finding A Way” was featured on Barrie’s Rock 95. Tomorrow's Glory has been invited to open for established Toronto-based bands, such as You vs. mE and Mary Rose Obsession. They have also been nominated for a Toronto Independent Music Award for "best live performance" and finished second at Barrie’s Rock 95 “Local and Loud” competition Looking forward, Tomorrow’s Glory has a busy time ahead. Not only will the band be featured at a number of festivals around the GTA, but the boys are gearing up for their second tour. This time heading north, making stops in Sue St Marie, Sudbury, North Bay and Muskoka. They also plan to release their 5-song EP in the summer of 2010.

Outstanding by Robert Thompson-So, Vice Chairman and Chief Operating Officer of WIDEawake Entertainment Group Inc
Caught a Tomorrow's Glory show at Hard Rock Cafe Toronto and they blew me away. From the overall image, to catchy fun tunes and an amazing, energetic stage show. We at WIDEawake Entertainment look...
Tomorrow's Glory Rocked The Edge by Rod at The Edge Alternative
The guys from Tomorrow's Glory delivered one of the best Edge night's we have ever seen. From cover music to their own stuff, it was all great sounding and made for a great night!
Toronto based, Tomorrow's Glory are on the rise. by By Kevin Bunting at The Garage
Toronto based, Tomorrow's Glory are on the rise. The band is and absolute pleasure to work with, and I would recommend them to any other promoter or booking agent. They are professional on stage...
p
A
n
E
F
Song Title by Artist Name
987654d
LM
iAnEAqqqq