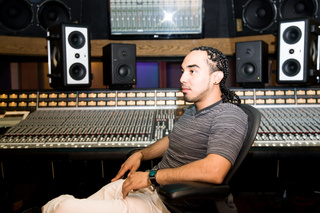 Born in Washington D.C./Marlyand, this young man has had an interest in music at a young age. Influenced by music all over the world such as Hip Hop, R&B, Afro-Latino, Electronica, Dance, he's been able to attract attention to fans around him.

While interning with BET Networks in Washington D.C. he was able to organize a music-bed for a BET-J commercial “BABY JAMZ”. The year after he had the opportunity to intern at BadBoy Records in NYC and worked for Photographer mogul Johnny Nunez.

Currently T-NO has moved to San Francisco building his own publishing company, starting his brand (T-NO) and is in the works of self-releasing his first EP “This is T-NO...” , showcasing his production and songwriting skills, coming out late summer 2011. Keep your ears and eyes open for any future events coming up and spread the word around about this upcoming Producer & Songwriter, T-NO!