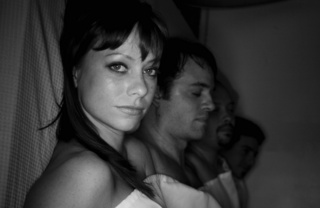 ThreadSpinner was conceived on an ordinarily windswept fall evening when a tall, quiet preacher's son laid eyes on a young, defiant girl in an old warehouse in Michigan. The connection between these unsuspecting souls held fast and steady as it threw them into each other's willing arms and tired hearts. The unrest they shared in the thought of living conventionally was met with relief that with each other, no desire or aspiration was ever to be laughed off or snuffed out. Their stories now interlaced, they drove across cornfields, mountains and deserts to settle in California and establish an altogether new life, unaware that there were melodies and lyrics already weaving together inside them.
In sanctuaries and in quiet rooms, Jon and Sarah unwrapped their gifts -- fingers pressed against guitar necks and pounded on ivory keys as they worked and waited. Leaning fully on the words of her closest friends, Sarah slowly began to allow her voice to step out on its newborn legs. A lifetime of fear had held it in until this time, and once this wild bird had been released, nothing could catch it.
ThreadSpinner's music bears resemblance to a haunting memory that is too distant to place, but too deep to ignore. Their songs tap into something that has little to do with what is in front of us and everything to do with unearthing what is inside us. Here there is no fear. There is a thread that connects us all, and knowing that changes everything.