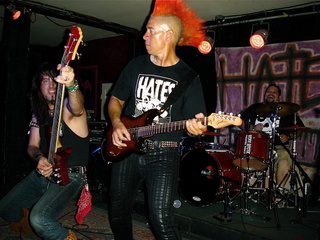 Starting back in 1979 the Hates hit the Houston scene with apparently no plan in turning back. This time period, compared to today, held little of what could be considered a punk rock scene. The U.S. was scattered with bits of what would eventually come together as a facet of the now globally known phrase American punk. Down on the South coast a young band inspired by the uprising sounds of British punk gathered their music playing abilities and against the grain ideals to form THE HATES. Original members have dispersed throughout the years leaving original member Christian Arnheiter on lead guitar and vocals, Dave Deviant on bass and Joel Mora on drums. THE HATES’ lyrics mainly indulge themselves in the problems facing our society today. Musically they pump the traditional early punk sound and rockabilly tendencies through the P.A.s into the ears of loyal fans.

30 Years Of Hate by Houston Press
The Hates pretty much do one thing and after three decades of largely thankless toiling in Texas punk-rock trenches, they do it well...
p
A
n
E
F
Song Title by Artist Name
987654d
LM
iAnEAqqqq