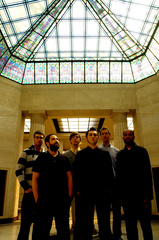 We (The Federalists) are a band from the San Francisco Bay Area. Next I’m supposed to tell you that we formed in 2005, followed by a description of our sound. Everyone in the band has eclectic tastes in music and together we have our own distinct sound (The Federalists). Our music has been called everything from indie to classic rock, alt. country, and classic pop. We have released two albums and are about to begin work on our third with, our new label, Talking House Records. We don’t strive to be part of a fad. We aim for timelessness; we aim for greatness. Still interested? Take a listen for yourself.

Diablo Magazine by
'Spoon comparisons hit you up front, but it's the lingering taste of Elvis Costello that gets us excited.'
3hive by
'smart indie rock and a penchant for occasional flashes of electronics'
Soundpick.net by
'the sophomore album for The Federalist has shown up on the San Francisco circuit as an effortless record to throw on the stereo.'
Zero Magazine by
'The Federalists are joined together not only by true talent but their undeniable ability to catch your attention and leave you singing their songs well into your workday.'
The Bay Bridged by
'The Federalists use good old-fashioned indie as a base, add effected guitar and elements of country, and spice it up even more with multi-part melodies and harmonies.'
Contra Costa Times by
'they seem to appeal to a wide range of people with good music taste'
Emotional Punk by
'...displays a sound that is a cut above the fray of today's music scene.'
The Owl Mag by
'The Federalists are a guilty pleasure, easy to indulge in, straightforward in their earnestness and sweet pop.'
Big Takeover by
'The Federalists’ sophomore release is a carefully constructed showcase of upbeat indie rock....Describing themselves as too mainstream to be indie and too indie to be mainstream have the right...
Performer Magazine by
'It’s clear that The Federalists have a strong grip on both the accessible and the innovative'
p
A
n
E
F
Song Title by Artist Name
987654d
LM
iAnEAqqqq