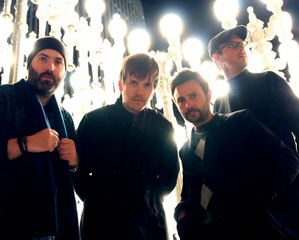 The Diviners formed as a "back to basics" indie rock/pop combo. Damon and David have played and toured in and around Los Angeles (and abroad) for a number of years in various other bands and projects. Berklee alum, Damon Stout met David Holcomb while filming the movie Bulldog and the two formed a unique musical connection soon after. Damon has received 2 local Emmy awards for film and music, as well as a successful stint as a jingle composer. David Holcomb’s vast film and musical experiences lend to his distinctive guitar playing and musical styling. Rounding out the lineup is Brian Stout and Dave Drazga, both formerly of the Chicago based band Spongeworthy. Both Brian and Dave have been active in the Chicago music scene and have played/toured extensively throughout the Midwest region with a variety of different groups. The Diviners are currently rehearsing in preparation for their upcoming tour to showcase "The 13th Generation.