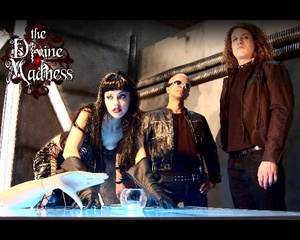 'A perfect combination of rock, pop, and classical influences'
- Monsters and Critics

Quick Fact sheet:
- The Divine Madness have been selected as one of the TOP Music Artists to be showcased at the Temecula Valley International Film & Music Festival 2007
- MTV2 LA Battle Projekt GRAND FINALISTS - Number #1 voted band with over 310,000 votes worldwide!
- Music featured on Tokyo Pop's multi-million dollar webisode series Bizenghast
- Three music videos featured on DVDs in every Blockbuster and Hollywood Video store in America.
- Consistently in the Top Gothic and New Wave artists worldwide on Myspace
- 5 star rating on iTunes and CDbaby
- Debut album sold out within 3 months of release. Now in second printing.
- Consistently on the Top Artists chart on the Podsafe Network
- Over 68,000 fans on myspace
- Over 1,300 plays and visits a day
- Victoria Mazze article in Italian Maxim
- Victoria Mazze voted as one of the sexiest online celebrates
- Mass overseas appeal in the vein of Evenesance, Within Temptation, Birthday Massacre, and Lacuna Coil.
- Recently played sold out shows at the legendary Roxy on the Sunset Strip in Hollywood
- Composed soundtracks for many films currently appearing on the scifi network and overseas markets

The 5 grand finalist bands played their hearts out to a sold out crowd at The Roxy, thrilled their fans and received invaluable feedback from the star-studded panel of judges including:

- The Divine Madness will be featured on Tokyo Pop's Bizenghast / Episode 3 - August 2nd!!!

- The Divine Madness have just completed the orchestral soundtrack to the Asylum's TRANSMORPHERS. The sci-fi epic is due out at Blockbuster video on June 26th!
Check out the band's 'Faith' video in the special DVD features. Watch out for band cameos!

- The Divine Madness are very excited to have enlisted music legends Steven Severin from Siouxsie and the Banshees and Jon Astley (The Who, Tori Amos) to help mix and master our Rapture LP.

- Victoria has completed composing the score to the documentary film 'Epicenter' that deals with the crisis in the middle east. The show is due to air worldwide on PBS prime-time in June 2007. The film will feature The Divine Madness song 'Once' in the end titles.

Have you ever wondered if Alice left all the rabbits alone, stopped pondering at tea parties, and instead took on being the lead singer of a band, what she would sound like?

I'm talking about vocalist Victoria Mazze of the new band The Divine Madness.

The Divine Madness are experiencing rebirth as cinematic Rock/Goth with style, reminiscing such 80s artists as Berlin, Blondie and Siouxsie And The Banshees. Art Rock? Art New Wave? Whichever - it breathes originality.

The band draws its inspiration from such diverse influences as 80s New Wave, Brit Rock, Opera, classical music and film composers such as Danny Elfman. The Divine Madness have carved out a distinct sound of angelic vocals with epic choruses, cinematic alt/rock/classical instrumentation, electronic touches, and a sensual gothic feel.

When asked about the bands inspiration for the songs Victoria says: "From death, birth, love, lust, mortality, immortality, sacrifice, religion, politics, stories in the paper, stories from children's books, personal experiences; one of us even had one of the songs come to us in a dream."

The band performs in the LA area at such clubs as The Gig, Safari Sam's, The Lava Lounge and The Dragonfly.

The Divine Madness songs and video can be seen in the new DVD: "Transmorphers" and "Bram Stoker's Dracula's Curse" now available at Blockbuster video, Hollywood video and soon to be on the Sci-Fi Channel. The Divine Madness songs can also be heard in the films: '911 The Commission Report' and the upcoming film 'Dragon'. Their video for 'Gentle' is featured on the DVD extra features for the film 'Hitchhiker'.

For all the latest news, videos, releases, visit
http://www.myspace.com/thedivinemadness

The Divine Madness are

‘Neverworld’ album review by takes the listener on a journey of enjoyment
With the release of ‘Neverworld,’ The Divine Madness has crafted an album that reflects the band’s diversity while offering fans the band’s signature sound.The 13-track album runs from thumping...
Amazon.com reviews by fan reviews
The Divine Madness is one of my personal favorite unsigned bands that I have found through the social networking website Myspace. I discovered them a couple of years ago and have been a fan since...