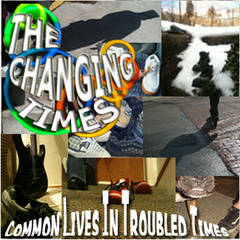 The Changing Times are a rock band from the Philly area. In 2009, The Changing Times began working on their debut album, "Common Lives in Troubled Times". This process became a journey through which the members grew stronger individually and together as a band. The Changing Times saw "Common Lives in Troubled Times" as an outlook on how people influence and are affected by each other and the world. All people have an impact, whether large or small, on the outcome of their times. This album is the result of the culmination of an individual artist's right to create something bigger than themselves with an ever-changing sound.

The Changing Times by Revolutionary Recordings
From the echoes of the distant past and the ruins of Valley Forge comes the sounds of The Changing Times. A trio from American's eastern seaboard. They are fully prepared to take their rightful...
p
A
n
E
F
Song Title by Artist Name
987654d
LM
iAnEAqqqq