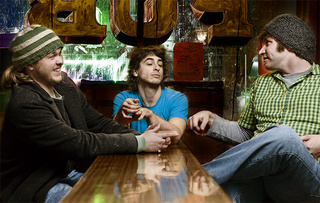 Catchy, ear-popping West Coast rock with a bombastic flair and a dark, humorous, redemptive attitude ranging from simple, poetic creations to hardhitting punk rock sideshows. A punk rock painting has a love-fight with a classic rock machine; this is their progeny.

Based in the San Francisco Bay Area, The Boneless Children Foundation's music ranges from simple, poetic creations to hardhitting punk rock sideshows. Born & raised in St. Louis, Missouri, San Francisco transplant David Sophia Siegel leads his band of musical malcontents through the perilous environment of rock music today. This group has developed a unique sound that has earned them comparison to The Police, The Talking Heads, The Who and The Unicorns, among others.

The Boneless Children Foundation's debut album "Stars For Anyone" charted as high as #200 on the weighted CMJ charts in November of 2007. Furthermore, also in 2007 the band was featured on the San Francisco-based Thread Productions compilation, “Dragon Slayers, Volume 2,” along with a host of impressive San Francisco Bay Area bands including Tartufi, Or The Whale, Birds and Batteries, and the band was featured on NPR's online Open Mic program, was honored to be mentioned and linked in a music blog on the New York Times website, and in the last week of 2007 and the first week of 2008 was a featured CMJ/Sonicbids artist!

This version of the band formed out of band-leader David Sophia-Siegel's realization that if you want something done right, you have to do it yourself - and ideally with help from some extremely talented and motivated people. David grew tired of being told what things could and could not be done by the bands he was in - as they say, "Yes, we can!" After rumors that all prior band members were kicked out by the apparently-crazed Sophia-Siegel, new band-mates were found in the form of J. Logan Barrier and Jonathan Kepke, hailing from Tennessee and Long Island, respectively. Both brought unique talents to the group, including Barrier's photography ability and Kepke's magic with audio engineering. What's more, Barrier's explosive but heavily pocket-oriented drumming combined with Kepke's crazy rock and roll bass moves elevated the group to new, thrilling heights. One CD release and a ton of shows later, the band is now hard at work on their second full length album, which is slated for a late 2009 release.

The Boneless Children Foundation are a rock band of contradictions - intelligent, sometimes sardonic lyrics, catchy melodies, complex but easily-approached song structures, and a thorough enjoyment of Dionysian liberation combined with a need to be shackled and strung up so that, like Harry Houdini, the human spirit has something to fight against and from which to free oneself.

When not playing with the Boneless Children Foundation, David finds himself increasingly writing music for local, San Francisco Bay Area theatrical productions and small film and video projects, including a significant body of work with SF sketch comedy group Killing My Lobster. More info, including a full range of the music from a number of shows, can be found at http://www.davidsophia.com. He also writes webcomics, which he posts at http://www.bonelesschildren.com/comics.shtml