The Adobe Flash Player is required to watch videos on this page
Print The Apple Bros.'s EPK 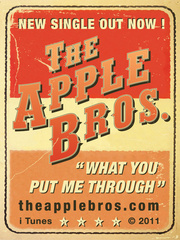 Having recorded with some rock & blues greats like Benmont Tench (Tom Petty & The Heartbreakers) & Sonny Landreth, they’ve learned to craft emotional yet powerful songs driven by passion, and often times, desperation. Originally a NYC duo James & Lou the bros keep expanding their sound as well as their members. Recent additions of Joel Cannon on gtr and Ben Toro on bass, have added a depth & tastefulness to their gritty, guitar driven songs. Their tunes run the gamut from the fist in your face, riff-ridden, rock anthem of “Beautiful World” to the twanging, Birds-esque sounds of “Who Have I To Blame.” They've supported such acts as The Zac Brown Band, Cat Power, BottleRockets, Marah, Cheap Trick, Noel Redding, Blues Explosion, The Flying Nuetrinos, Junior Brown Previous releases EXTENDED PLAY, ON AN EMPTY STOMACH and NASHVILLE available on iTunes.

Rock n roll like God wanted it to be by David Huijzer
Sometimes you get cd's that make you want to jump through your room, that leave you breathless, that will bring tears to your eyes and that make you want to play them to whole world. It happened to...
p
A
n
E
F
Song Title by Artist Name
987654d
LM
iAnEAqqqq