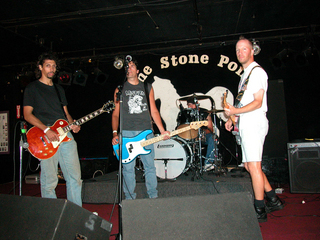 The Accelerators are a Union, New Jersey based punk band. The band, influenced largely by the Ramones, was started by singer/bass player Ron Nole in 1980 with talented but troubled songwriter and guitarist John T. Hansen, and backed by Dave Ross on drums. They released a number of self-produced vinyl records and cassettes and were featured on comps such as the Weird New Jersey collections with standout titles such as "Shades of Death Road". Their brand of fast and loud "power pop" music made them local club favorites throughout the late 1980s. Hansen, who produced much of the band's recorded output, continued to innovate on the basic punk ethos. For "Landscaping '99", a cassette release from the late 1980s, the band recorded with an actual power lawnmower in the studio. The band appeared a number of times on Pat Duncan's show on WFMU-FM. John Hansen died in 1999 due to effects of alcoholism in Philadelphia, Pa.

Ron Nole reformed the band with Anthony L. Rodriguez on guitar and A.C. Crouger on drums. With this lineup, the band released a full length titled "Punk Rock Rumble". The Accelerators are currently working on a new LP, due for release in 2008.
p
A
n
E
F
Song Title by Artist Name
987654d
LM
iAnEAqqqq