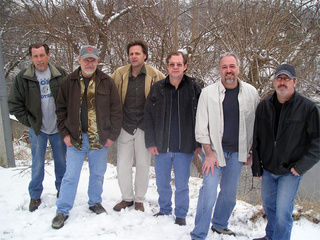 The 100s are a roots-rock / alternative country band consisting of six musicians who now call Eastern Iowa home, though they’ve all traveled their different paths before landing here. Built around the long-established songwriting duo of Jeff Schmidt (guitar) and Dave Pedersen (lead vocals), the current lineup has been together since early 2006. What was once a predominant regional folk-rock band has fleshed out to be a tour-de-force of pedal steel, electric and acoustic guitars, drums and bass, multi-part harmonies, and a common penchant for eschewing the same old, same old in song crafting. Six members hailing from different musical backgrounds and owning an equal stake in the songwriting process yield a unique blend indeed, smoothed down by years of hard-earned sensibility to what collaborating on the music really means. “Rural Route Rock” In a live performance setting The 100s never fail to go the distance, with superb musicianship and a roots-country flavor, borne on its ballsy pedal steel and guitar foundations, with mandolin and banjo adding a folk flavor for a refreshing electric-guitar chaser, while the bass and drums give it a rock-solid groove born of a rhythm section that plays instinctually tight. The band plays festival shows and small intimate venues with equally enthusiastic audience reaction from their fanbase, while winning over new fans wherever they go. They’ve opened for such noteworthy acts as Bo Ramsey (Greg Brown, Lucinda Williams, Pieta Brown) and Nashville stars Little Big Town. Along the journey their signature sound has picked up the monicker ‘Rural Route Rock’, probably due to the fact that it was conceived (and is most often enjoyed) somewhere in the Iowa heartland, a far piece off the beaten track where the fans literally do “take the gravel home” after a show. The dusty, bumpy road trip happens all the way through a 100s live performance; you’ll think you’re there riding shotgun on a hot summer Iowa afternoon just before the sky opens up to cool things down some…guaranteed you’ll drive off with more than one song stuck in your head for the night. The band has recorded two CDs; 2005’s “Take The Gravel Home” is predominantly a folk-rock disc with fiddle, dobro, banjo and mandolin to the fore, while 2008’s “Echoes” waxes more rock-and-pop-vein, with vintage acoustic guitars, twangy Telecasters and pedal steel laying the groundwork, accented by the occasional banjo, piano, Hammond organ, mandolin, and yes, even a cello. 23 of the 25 songs on these two discs are original material. The music of The 100s has been featured on regional radio stations KRUU, KFMG, KRUI, and KGRR, as well as on Iowa Public Radio affiliates KUNI (“Live From Studio One”, “Down On The Corner” with Bob Dorr, “Folk Music” with Karen Impola), WSUI (“Java Blend” with Ben Kieffer), and University of Iowa Television’s coverage of “Live From The Java House”. In addition, “Echoes” has received extensive airplay on KUNI’s “Night Music” segment upon its December 2008 release, placed in heavy rotation on the playlist with well-known national and international artists. They’ve been heard as far away as Long Island’s WUSB in Stony Brook, NY. For more information, please visit the official 100s website at www.the100s.com , or the band’s Myspace page at www.myspace.com/the100srock The 100s – c/o straitjacketbowtie records • 1301 Highway 30 SW • Mount Vernon, Iowa 52314 • 319.270.4169 • holycatzeke@yahoo.com

The 100s ~ 'Take the Gravel Home' by Iowa City Press-Citizen
It's been years since Iowa suffered any shortage of singer/songwriters capable of zeroing in on the state's idiosyncrasies, yet it's arguable if there's ever been a rock band that has captured the...
The 100s offer an appealing ride (I.C.-based band’ by Cedar Rapids Gazette
The 100s’ music is upbeat, melodious and as straightforward as its members’ Eastern Iowa roots. Led by songwriters David Pedersen and Jeff Schmidt, the band plays an enjoyable brand of folk,...
The 100s ~ ‘Echoes’ by Little Village - Iowa City
There’s country music, and then there’s Country Music. The 100s are the latter. What I mean to say is that there’s Nashville Commersh, with its $800 cowboy hats and $500 haircuts, and then there’s...
p
A
n
E
F
Song Title by Artist Name
987654d
LM
iAnEAqqqq