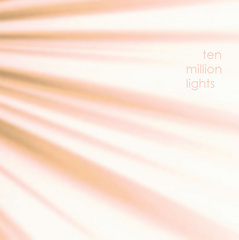 ryan and eric started this project after our last band, saturna, burned out. we had a good run. we had the amazing opportunity to tour with bob mould (!!) in 2008. we licensed songs to tv shows. we got to play a ton of shows in portland and seattle, and we made trips to SXSW and NYC. but sometimes these things come to an end. and when they do, it's really valuable to stop and take a breath. think about some lessons you might have learned. think about how you might do things differently next time. eric and ryan started recording the songs in their heads, we met emily who sang beautifully on the record and the duo became a trio. now we're ready to share it with the world. like the first song on the record says: here we are. so let's see what happens next.

Bliss-rock ambience with irresistible pop hooks by Thomas Bell (Baker & Taylor's CD Hotlist)
Lovers of shoegaze, dream pop, and '80s-'90s guitar rock will hear pleasingly familiar sounds on this album, but 10ML adds a compelling, upbeat dance sensibility to their familiarly gauzy,...
A smoky, full-bodied pour of elixir lips by Northwest Adventures In Audio
Ten Million Lights just released their debut self-titled, self-recorded, drummer-less album, and it sounds like it’s not a debut, produced in a studio, and with a drum…well, a good drum machine....
Dreamy, energetic, & nothing short of a revelation by Just Out
Ten Million Lights is a new act commanding attention amidst the buzz of the Portland music scene. Combining the musical inspirations of Ryan Carroll, Eric Block (both formerly of Saturna) and Rose...
p
A
n
E
F
Song Title by Artist Name
987654d
LM
iAnEAqqqq