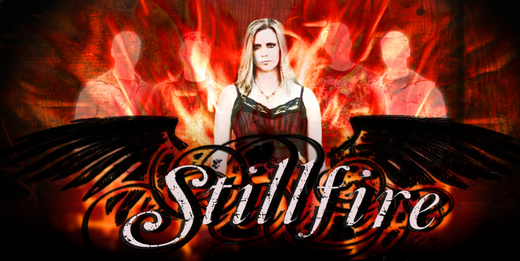 Recent years have seen Stillfire progress from playing their music at small venues to rocking fairs, theaters, and music festivals such as X-fest, Tom-fest and Creation. As a female fronted hard-rock band, it may seem easy to lump Stillfire in with other bands of the genre with a woman as the lead singer. Instead of the gloomy gothic industrial style characteristic of many of their counterparts, Stillfire draws more influence from the 'Post-Seattle' rock sound of the mid to late 1990s. Their sound has sometimes been described as 'Bi-polar'. The lead vocals are highly distinctive and carry a strong sense of passion and resolve. Conversely, the songs range musically from heavy riffs and guitar solos through acoustic interludes to screaming breakdowns and back again. The unique use of this diversity gives Stillfire a solid niche within their genre.

What sets Stillfire apart is a firm devotion to their values which are woven in and out of their songs. Stillfire believes that their message should be lived out in how they relate to the audience, event staff and the bands that they perform with. As the old Proverb says, 'Iron sharpens iron.' Stillfire especially hopes that their convictions are portrayed to others in the way they relate to one another.

To be a still fire is to allow the passion inside of you to speak for itself. It is allowing Love to work through and speak through you. This is what Stillfire strives for as the way of injecting love peace and clarity into a genre generally consumed by hate lust and confusion. The world will not be changed by merely voicing pain through emotion, but by living out love and compassion to those who are living with that pain.

Stillfire has played at events like Creation '08, the Gorge Amplitheater, Tomfest, X-Fest, The Extreme Tour, the Marion County Fair, and many other northwest festivals.

DISCOGRAPHY
The Wounded - 7 song, self produced CD released in December 2007. Songs included on CD are:
1. I'm Yours
2. Mystery
3. You Never Leave Me Alone
4. Introspective Meltdown
5. Sleeping
6. The Awakening
7. Further Still

Most songs available for streaming on our MySpace page.

Turn it Up! by Lacey Mosley from Flyleaf
Turn it Up! These Guys are really good......
High Energy "Wow" Factor by -Boots- Owner of "Little Metal
From beginning to end Stillfire throws down a high energy stage performance to wow any onlooking crowd. From my stand point they stack up well against other female fronted bands in the main stream...
Nothing Like the Industry Standard by Jeff Schlottmann - NW Music
What can I say about female fronted rock bands? Most of them sound too identical, to say the least. Sometimes I think somebody is sitting in the music headquarters stamping these bands out with a...