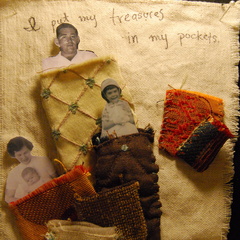 Julie Odell is a pianist/vocalist out of Louisiana who can't wait until her first EP is released containing songs such as "Broken Docks and Salty Water" as well as "St. Joe" that is featured on her music video. Her piano arrangements will have you feeling like you are listening to an entire orchestra and her breathy voice is no less captivating as it teeters between innocent and sage-like qualities. Epic, silly and always clever are three ways to describe her lyrics that flow seamlessly between fact, fiction, and truth. The CD will also feature Gary Brown, Devin Lawrence, and the Craft Brothers filling in on sax, mandolin and strings respectively. Julie currently resides in Memphis while attending college.

Alan Gordon is a producer/engineer out of New Orleans who has worked with Julie for the past year on getting the EP sounding as best as it can, and was also the driving force behind the music video.
Alan cites Steve Reynolds, Danny Kadar, and Rick Rubin as major influences in his production style. Alan now lives in NYC while attending NYU's Recorded Music Program.