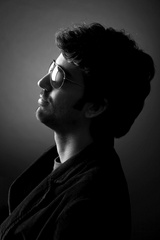 Shahar Vaknin is a singer/songwriter with a unique approach to sound and impressive vocal presence which dominates in the Israeli music landscape.

In 2005 he formed Deadwood, an alternative rock band, which self-released their first EP titled "Penny for Your Thoughts" In 2007 and spent the year performing the songs to a loyal growing audience.

In 2008 he began to handle with other elements of his music influences and inspirations. The result – an electro-folk/rock approach that , in collaboration with producer/engineer Dan Shalev , adopted to be the foundation of a new solo project.

"Part of The Circle" was produced and recorded during 2009, when simultaneously, he performed solo acoustic gigs in intimate locations.