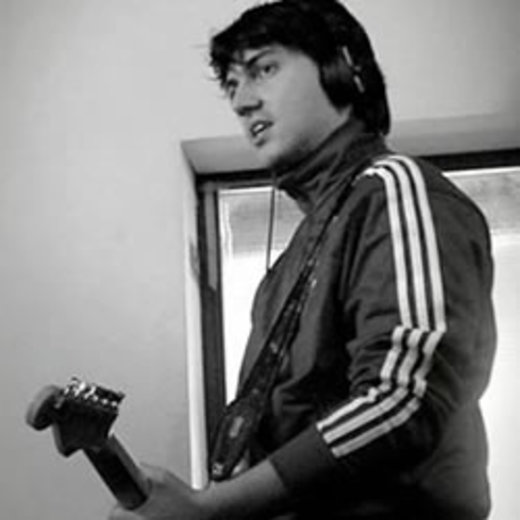 “I was always fascinated by space and time,” says singer/songwriter Sebastian Portillo, who calls the picturesque Swiss state of Bern home. “The idea of understanding time and space and making it useful for human kind also reflects in my music and in my lyrics. I want to get to the bottom of every unexplainable thing and get an explanation for it.” For Sebastian, the airy, funky, atmospheric alternative pop music he creates in the studio goes hand in hand with his life’s quest to understand and explain mysteries great and small. He says the most exciting mystery to him is the process “of creating something that does not exist yet.” “The search for melodies and the expression of a feeling that lies inside of me with the help of sounds in musical instruments... it’s that challenge of creating something new” for others to hear that “sounds like the sounds I’ve got in my head,” Sebastian explains. concert_amalgame Those sounds in Sebastian’s head started at two or three years old. His father was a Flamenco singer, and his grandfather bought him a real drum to play on instead of banging on pots and pans. At six years old, his parents enrolled him in percussion lessons. At eight years old, Sebastian began piano lessons followed by vocal lessons. He says Michael Jackson’s Bad and Dangerous albums had “a tremendous early impact on my musical style and development”. At 16 years old, Sebastian decided music would be his life’s path. That year, he wrote a song for a girl he secretly loved. The Spanish ballad was performed in front of the entire school, and the overwhelming response from classmates and adults gave him the self confidence to develop his song writing skills. A short time later, Sebastian joined forces with school friends and formed an original rock band they dubbed Lines in the Sand, with Sebastian composing most of their songs. With his career goals focusing on music, you would think the beautiful surroundings and living history of Switzerland would be a prime place for a creative musician to be inspired and earn a living. Sebastian, however, found local attitudes working against him pursuing music for a livelihood. He expended a lot of energy in the years that followed trying to overcome that anti-music career mentality as he wrote and recorded songs but found little support from record labels. So, he taught himself production techniques and learned how to use a range of studio equipment. Sebastian’s fascination with time and space and the unexplainable began to merge with his love of music. He set about analyzing songs to find out how they worked, and to study a good song’s structure. It was all part of what he calls “a different approach to listening to music.” “Every song I liked was like a book I could read and learn something about the story it was telling in-between the lines. With my music, I have a feeling inside me and then I focus on the idea of how I’d like a song to be. The music has to express an emotion or a feeling. Since most of the feelings can’t be described in words, I usually have to use pictures and stories that evoke what I’m feeling” In 2001, Sebastian was accepted into the Paul McCartney Music School at the Liverpool Institute for Performing Arts, where he improved his lyric writing skills and learned how to produce a professional record. He also furthered his self-taught skills on guitar and discovered that his songs “became another dimension if they were written on the guitar. ” Sebastian began playing gigs in Liverpool and made many musical connections−even meeting Sir Paul himself. Despite everything coming together musically, paying for the education proved too daunting. Sebastian decided to move back to Switzerland where the government would finance his university studies. Even though he was determined to reach his musical goals, school and rock star dreams quickly collided in Sebastian’s life. His studies demanded more and more time, and he had to “take one step back in my musical development.” Five years passed by, and he knew he’d have to work even harder and to become better−to network, record, perform and get his music in the right hands. A new band was born out of his ‘work harder’ musical drive, but the band was so stylistically different from his previous musical output that it did not go over well back home in Switzerland. Sebastian then recorded a three song solo demo and later wrote several songs for a Natacha, a major Swiss artist. Sebastian’s composition “Summernacht” reached #41 on the Swiss charts and spent 14 weeks in the Top 100. He then wrote a song for internationally known artist Lou Bega. In 2006, Sebastian participated in a talent show called Superstar, where he performed his songs to an audience of 200,000 until the production crew limited him to performing cover songs. Sebastian came in fourth place and became much better known nationally but still had no record label offers. Sebastian took his recording career in his own hands in 2008 and released Utopia on his own Portillo Records label. He is currently working on a second album full of more music he calls “honest, funky, spacey, freaky, round, emotive, political, groovy and casual.” “Music and words are my artistic form of expression,” he adds. “Instead of creating a painting, a sculpture or other piece of art, I’m creating my music, which is, very often, like a picture of my soul or state of mind. I love the human mind... space and time−the wide, the unexplainable, the mystical, the supernatural. My music fills the emptiness in space and time with something emotional.”