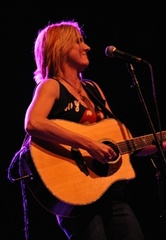 Born in Manhattan, living in LA and touring everywhere in between, Sean Wiggins has over over 100 songs in her catalog and well over 10,000 CD’s independently sold. On the internet, the band’s YouTube views and song plays have exceeded 25,000. Sean and her band lOne gOat have toured the US in support of her last 6 CD releases, playing over 100 dates per year while opening for and sharing stages with the likes of Blues Traveler, Cyndi Lauper and Sophie B Hawkins. Sean appears at festivals, clubs and colleges in Nashville, New York, Atlanta, Boston, Chicago, Houston and more. Sean also toured the US with the theatrical production of Del Shores’ “Sordid Lives,” starring Leslie Jordan (Will & Grace). In California, Sean and the band appear yearly at events such as the Gilroy Garlic Festival, Avocado Festival, San Diego Fair, and California Mid-State Fair. As an award winning writer and performer, Sean has music placement in films, on TV, and on the radio both nationally and internationally. The new CD, “Naked Thursdays” is already posting the highest sales and the 2010 tour schedule is revving up!

Top 10 in NMS “Artist on the Verge” Specialty Competition, June 2010

Sean Wiggins at Circuit, Chicago by Chicago Free Press
Whether solo or with her band lOne gOat, it’s been Sean Wiggins powerful and uncompromising vocal style that has kept people coming back for more. Wiggins can sing!
More Press Available At www.SeanWiggins.com by SeanWiggins.com
For a full listing of press, see the Sean Wiggins & lOne gOat website!