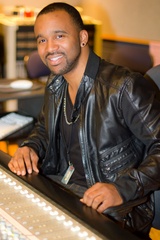 Born and raised in Chicago Illinois, and St. Paul Minnesota, Sean Hudson started his career at the age of three singing in Church. At the age of 12 Sean decided to take his passion for music to the next level by creating and arranging his own works. Sean began writing poetry at the tender age of 10, and soon after structured his poetry into songs. Sean had his first encounter with the art of beat-making in his first year of High School. Amazed at the simple complexity of making music from scratch Sean knew becoming an all around artist was his destiny. Ten years into the game with the same grind and the same determination, Sean continues to captivate a wide ranged audience based on his versatility and raw God given talent. Fluent in all genres, he is definately one of the most unique and well rounded artists to hit the scene and he is THE FUTURE. Perfecting his craft Sean now attends the Musicians Institute in Hollywood California, studying Keyboard Technology.