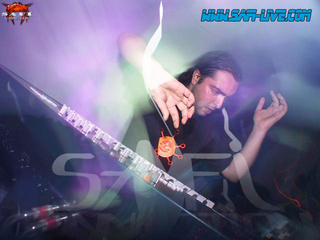 Safi Connection is Mishel Bitton(31) Mishel first started to make music back in '97, where he released an album under the project “Sonichaos” . The Sonichaos album presented a very melodic approach that fitted the times back than. This album was released through Planet Music, a sub-label of B.N.E, a major player in the international Trance scene.

Few months after the release of “Sonichaos” Mishel teamed with Avi peled, together they came up with the "Todra” project, which had a much more matured musical approach. This project was instantly signed for the Krembo Records label and was released in '98 with great responds worldwide.
From that moment on Mishel started spining music around the world and from exploring the international markets and trends Mishel felt that he must bring his ideas into life but with a whole new perspective and so he changed his musical direction and progressed to what everyone knows today as “Safi Connection”.

Mishel started to work on the “Safi Connection” project in 2001, along with Tamir Ozana(a.k.a – Atomic Pulse), after polishing their first few tracks they signed a deal for an album to DJ Dede's own label “Spectrum Music” and in early 2002 the debut “Safi Connection” album, “Prince Of Paranoia” came to life. At the very same studio , was working Avi Shmailov , a.k.a – ASTRIX .

This album was distributed world wide through MDMA(r.i.p) and it has created a mega buzz for “Safi Connection”'s music and shows, reviews and interviews came out in all the respected media, magazines, internet, dj's charts and more.

2002 was a busy year for Mishel, it is the breakthrough year for him actually, since the release of the “Safi Connection” debut album Mishel and Tamir decided to go each on his own way, And so Mishel kept to work on the “Safi Connection” project while Tamir continued his career as Atomic Pulse. SAFI CONNECTION 2nd studio Album was Released on Arcadia Music Japan & Distributed worldwide by no else than TOSHIBA – EMI , Japan .

Apart from “Safi Connection” Mishel also collaborates with Micha Yossef(a.k.a – Echotek) as half of the dou “Neo Logic” and on another joined project named “Central Nerve”, both projects are getting strong interest throughout the globe so watch out for more news on these projects soon.more colabrations as Safi with Space Tribe,Melicia,Sally Doolaly,Psykovsky,X-wave.At the moment safi is working on a psy guitar project that would be as a live act Of 2 pepole , Safi feat. Liquid phase (safi & guitar player).Also known as B-Tone , a more progressive project . an album was realesed on Synergetic records on june 2004 , called “B-Tone – Mantra acts”.   In 2004 Mishel launched he's own Label – SPLIFF MUSIC. Spliff music gained a very warm feedbacks globally . and released no less than 23 cds till today .

All of Mishel's projects (Safi Connection, Neo Logic, B-Tone , Safi feat. Liquid phase , Central Nerve) are known for having a top quality production with stuning fresh ideas, it's the new style, its progressive full on trance, not the usual Israeli full on, twisted, funky and most important of all – it rocks the dancefloors everywhere around the world.

1 or 2 synthesizers from the following :

And a mixer with at least 8 or 16 channels

PSYLICIOUS RADIO SHOW INTERVIEW WITH SAFI CONNECTI by PSYLICIOUS
01: Mishel, welcome to the Psylicious Radio show's 1st birthday show! How has 2008 been for you so far? Hi Tom & Maja, good talking to you as always. Happy to celebrate the Psylicious Radio...
Interview on HARDER FASTER ::: Getting connected w by HARDER FASTER
Getting connected with Safi Connection Reported by Psylicious / Submitted 25-06-08 18:06.34 Better known as the Israeli psy trance act Safi Connection, Mishel Bitton has been making music for the...