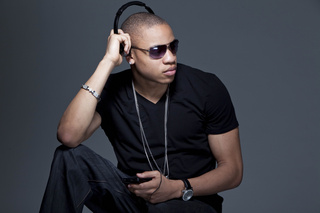 At 15 years old Rotimi Akinosho wowed the historically brutal Apollo Theatre crowd, singing his way to first place at amateur night. Since then the New Jersey singer/songwriter/actor/model has achieved national recognition for his powerful vocals and distinctive confidence. With academic ambitions Rotimi moved to the Midwest where began his studies at Chicago’s prestigious Northwestern University. By his junior year the charismatic vocalist became a favorite among students who packed out school venues just to hear Rotimi’s sultry sound. After selling 800 copies of his mixtape “The HG Compilation” in two weeks on campus, Rotimi established himself as a Midwest staple and began focusing on expanding his repertoire to professional acting. Playing a young soldier in “Salt N Pepper” and the leading role of Julius in the gospel musical “Tell Hell I Ain’t Comin,” Rotimi gained recognition from director Marcia P. Samuel who described the actor as a “tremendous talent” with vocals reminiscent of a young Michael Jackson. Rotimi has shared the stage with America’s Best Dance Crew and award winning Jabbawockies dance team. As an opener for international superstars rapper T.I., Estelle and NERD, Rotimi has solidified his standing as one of the brightest up and comers in the business. With his newly released hit single “Beautiful Music” securing hundreds of Myspace and Facebook plays a day, Rotimi is on track to developing himself as a capable artist and industry force. In 2009 Rotimi has already raised the bar, headlining for several Northwestern University events including Dance Marathon. Educated and self-confident, Rotimi blesses his music with an artistic edge and unparalleled showmanship. Currently Rotimi is preparing to launch into a three tier marketing campaign that will attack airwaves, computer monitors and TV screens across the country. For more information on the budding R&B vocalist visit www.facebook.com/rotimi1, www.myspace.com/rotimirandb and www.youtube.com/rotimitv, or follow the talent on twitter at www.twitter.com/rotimi1

Introducing the Sound of “Beautiful Music” By Roti by Collegeradiomusic.com
In the beginning, when the whole idea to create CollegeRadioMusic.com was hashed out over 4am Denny’s think tank/after party rendezvous and late night dorm room “get rich” brainstorming; there was...
The futue of R&B by irhymenow.ning.com
Rotimi Akinosho affectionately known to his hometown fan base as “Rotimi” is blazing the East coast and Midwest with his sultry voice, unique swagger, and lyrical presence. Performing with the...
THE HUSTLE GROUP by p1music.wordpress.com
...Rotimi Akinosho, better known as Ro, is prone to rock the crowd and make the ladies swoon. Rotimi has been spreading his love for music since a young age- at 15 he took first place in Amateur...
Rotimi – Update by collegeradiomusic.com
Once again, I’d like to introduce myself, Mr. Put On aka Liad Put U On. I like to think that my purpose in my posts is to put “the people” (you) on to someone or something that has a lot of promise...
Rotimi: Beautiful Music video + song by musicremedy.com
At 15 years old Rotimi Akinosho wowed the historically brutal Apollo Theatre crowd, singing his way to first place at amateur night. As an opener for international superstars rapper T.I., Estelle...
p
A
n
E
F
Song Title by Artist Name
987654d
LM
iAnEAqqqq