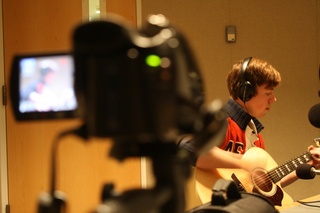 Ross Riskin, an 18-year-old singer-songwriter from Orange, Conn., has been writing and recording music for more than four years, is unveiling his sound to the world. His music consists of charming acoustic melodies and soothing vocals that are sure to put the listener into a state of total relaxation. Bands such as Third Eye Blind, Death Cab For Cutie and Dashboard Confessional are among Ross’ primary musical influences. After months of recording, Ross has finally released his EP entitled, Simple Things. The album contains five simple but brilliant acoustic ballads that manage to strike deep within the listener. The only instruments used were a couple of guitars and a piano. Simple Things begins with a clever and witty song entitled, The City. This track sinks its hooks into the audience and drags it in for more. Following The City is Break Me Down, which is one of the EP’s most popular tracks. Break Me Down consists of powerful lyrics and an upbeat melody that fits perfectly together. The next song is My Mind. This track might be the simplest song off the EP, but could very well be the most brilliant. Simple chord repetition and sweet ambient guitar notes in the background solidify Ross’ songwriting genius. Coming around the corner is Ross’ Without A Sound. This song starts off slow, but picks up with memorable lyrics and an awesome guitar change-up reminiscent of Dave Matthews. And last but not least is the cool and collective track, Simple 37. Ross composed this song after a weeklong spiritual excursion with his high school classmates. He returned from the retreat with an enlightened mind and a great idea for a closing track. Simple 37’s mellow presence is the perfect conclusion to this relaxing acoustic compilation. All in all, this EP showcases Ross’ finest work. Expect to hear and see a lot more from this talented artist. Ross wrote, recorded and produced Simple Things EP in his bedroom and on his computer with only a couple of microphones. Unlike many artists today, Ross took a new approach to recording. He recorded each song live to tape – meaning, the main guitar and vocals were both recorded simultaneously on a live take with no track overlays. If anything didn’t go according to plan, he improvised. This technique gave the EP a natural feeling that most music lacks.

New Music Spotlight: Ross Riskin by Junior's Cave
He has an amazing voice that when he sings certainly sounds heavenly to the ears. The 18-year-old Singer-Songwriter from Orange, Conn, Ross Riskin, is going to win your heart with his wonderful...
Small Town Singer-Songwriter Releases New EP With by PRLog
Ross Riskin, an 18-year-old singer-songwriter from Orange, Conn., has been writing and recording music for more than four years, is unveiling his sound to the world. His music consists of charming...
Local CDS: Ross Riskin by The New Haven Advocate
Ross Riskin, Simple Things EP (rossriskin.com). Riskin keeps the focus on his voice and acoustic guitar here with brief flashes of delay-heavy guitar or keyboard plinks adding color. At the outset,...
Awaken Music EP Review by Awaken Music
Ross Riskin, 18 year old singer/songwriter from CT easily strums his guitar as his voice lulls you into a dream-state. On his Simple Things EP, he begins with an easy listening song, The City....
Wildy's World EP Review by Wildy's World
Ross Riskin is an 18-year old singer/songwriter from Orange, Connecticut with big aspirations. Recording his debut EP, Simple Things, in his bedroom, Riskin spent months trying out and recording...
p
A
n
E
F
Song Title by Artist Name
987654d
LM
iAnEAqqqq