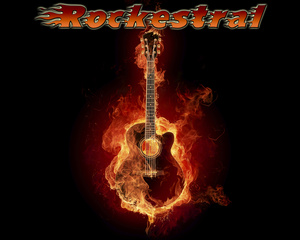 ROCKESTRAL it's most influence come from heavy rock band but also from great band of all time classic rock. Rockestral it's four guys with a biggest experience in the world of music since a long time, together we make a perfect blend of chemistry. We come from Sherbrooke,qc, Canada. and we are proud to show you our futur project. For now we worked on our next album so you can listen just the demo prod. and preparing tours with some covers from rockclassic to heavy rock!!!!! see yaaaaaa!!!!!!! and see you at the show!!!!!!!!!!!!!!!!!! Since the spring 2005 a new rock band emerge from the earth, there was born "ROCKESTRAL". Once we worked togethers and started to mess around, we just didn't stop on recording the new feature release album for 2008 call " ROCK ON EARTH ". After spending several month on this amazing stuff, " ROCK ON EARTH " was exactly the way we want it, most insistent, dynamics and diverse like the four guys we are!!! but with this album we really wanted to show our range and have songs that work for all the diverse fans of ROCKESTRAL shows and listen to our records.... The most important reason it's to make music because you love it, and i think that's why we spend so much time on it. We're perfectionists," if u finish a song and it's not stuck in your head, then how will it stick in someone else's head when they only heard it once or twice ? " So ROCKESTRAL most influences are many genre from blues, rock, heavy band,grunge !!! but stay heaviers with melodic music and vocals. For the respect listen all the album " ROCK ON EARTH " , and discover a new band from many others but remember... ROCKESTRAL our music it's there for stick in your heads!!!!!!! ROCK ON !!!!!!!!!! SO COME ON ROCK THIS FUCKIN' WORLD NEXT RELEASE IN PROD CALL " ROCK ON EARTH " all rights it's protected under the copyright for Les Productions Rockestral
Myspace Contact Tables -