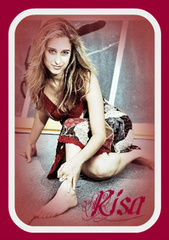 To Risa, anything can be a microphone, "I remember when I was growing up...I used to sing to the "Flashdance" album, in my family room, using an ear of corn as my mic" Now Risa is taking her music dreams and making them reality. An emerging singer/songwriter, Risa's song "All The While" won the Songwriters Hall of Fame New Writer Award. Her song "Falling Apart" can be heard in the movie "Queen Sized" on the Lifetime Channel. Currently Risa is going back and forth to Nashville writing, recording and working on her second EP. She has the pleasure of recording with producers and musicians who work with Joss Stone, India Arie, Norah Jones, LeAnn Womack, Martina McBride. Risa performed for New York's Z100 Zootopia pre-show opening for Akon, as well as performed the National Anthem in Giant Staduim and RFK Stadium in Washington, DC. Festivals include the Dewey Beach Music Fest, NACA National and Regional Conventions, Westpoint Military Academy as well as performing at several colleges up and down the east coast. Risa's soaring vocals and catchy hooks stay ingrained on your mind long after seeing her perform. For all things Risa check out www.risasmusic.com

by
Risa’s a terrific talent and I can’t wait to hear one of her songs on the radio soon...she definitely has hit potential. - Marilyn Laverty "Shorefire Media"www.shorefire.com
by
I’ve Showcased literally hundreds of talented new artists over the past 15 years. Risa is one of those that I truly believe will make it in this tough industry. In fact, I’ll bet on it" - Bob...
by
Risa can tune into your emotions. Making her debut into the music industry ... She sings with a heart of gold" -Jenn Press www.ItsInNY.com
p
A
n
E
F
Song Title by Artist Name
987654d
LM
iAnEAqqqq