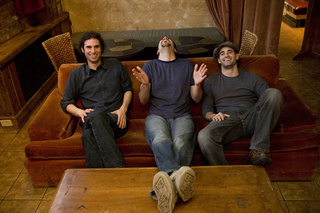 Formed in the reputable music town of Ithaca NY, Revision is a funk/rock band made up of three Ithaca College music grads. Having the instrumentation of Soulive coupled with the songwriting savvy of Wilco, their music grooves, rocks, and has a sincere live energy.

Fueled by their Vegetable Oil van, Revision has averaged over 100 shows a year touring with acts such as Derek Trucks, Soulive, Michael Franti and Spearhead, and The Cat Empire.

For their latest record "Amplification", the band entered the studio with producer Matthew Ellard (Morphine, The Slip, Billy Bragg and Wilco) in Boston. The record was released in April of 2008 in CD format as well as on USB drives. The USB version has the album in high quality audio, video downloads, and is a reusable 1gig drive which cuts down on waste.

May 2008 Rock sponsored by First Act