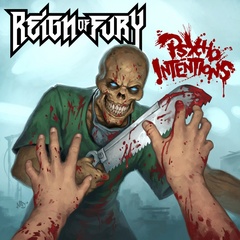 The members are an amalgamation of friends that have met over the past 15 years on the UK punk and metal scene. The original idea for Reign of Fury was born out of a guitar shop in Cheltenham in 2006. After a few member changes, the band finally clicked as a unit in 2010 and spent six months establishing their signature sound. The band toured throughout 2010 whilst writing material,for their first E.P release in March 2011, Psycho Intentions, which is being distributed through Goodlife Recordings. This coincided with their DIY video for the title track of the E.P, which was originally made back in 2010, being added to the rotation on the UK alternative music channel SCUZZ. The band mascot on the E.P artwork,is set to appear on all upcoming releases. They are currently working on their first full length album for release early 2012.

5 members. Drummer, Bassist, 2 x guitar and vocalist. Vocalist doesn't use a stand. Band has own equipment, including backline if necessary, however, due to travel costs, would prefer if venue are ale to supply.