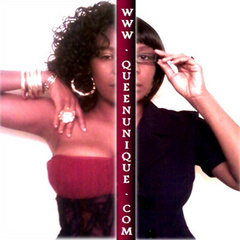 K.L. Shanks a.k.a. Queen Unique was raised in a small city where creativity such as the arts and poetry was taboo. It was not “hip” to be artsy and different in Fort Myers, Florida. While the children in her neighborhood wanted to play house, sports and to dance…Katrina wanted to play school, read and write. She was obviously cut from a different fabric and this soon made her an outcast to the other kids and her social involvement decreased. Eventually influenced by the majority, Katrina conformed to her friends and neighbors beliefs and suppressed this divine gift that was granted to her by the Creator.

After experiencing many ups and downs in life, Katrina secretly continued to use poetry as her private outlet and as a result, her talent continued to flourish. In late 2005 (as corny as it may sound) Katrina had hit rock bottom and resorted to a simple prayer over a fortune cookie. Her faith in God and herself had been tarnished to a point where she believed in only what was tangible. She asked the Lord to make the paper in that cookie deliver any message that she may not be hearing from Him because her senses had been impaired by worldly things. When she opened that cookie, it read, “Go Confidently in the Direction of Your Dreams”. This simple epiphany helped her to emerge from her shell, restore her faith into the “Invisible to do the Impossible” and finally release her passion to the masses. Public reaction has since agreed and Queen Unique has published her first book of poetry and thoughts entitled “A Mile in My Heels: A Personal Compilation of Wordplay”, started her own vocal and visual arts venue called Acoustic Affairs with business partner Mr. 239, written articles for magazines, read at poetry venues and is currently recording her debut spoken word C.D. trilogy (three parts: Spirit, Heart and Body) “Queen Speaks”.

Katrina has been writing since the tender age of nine and her key weapons are the power of her voice, her unabashed honesty, confidence, style and uninhibited viewpoint.Ms. Shanks is a member of the National Black Writers and Artist Association, Black on Black Rhyme, The Black Poetry Café and is the hostess of "Queen Speaks Radio" which is a hot new and uncut LIVE online talk show broadcasting on BlogTalk Radio on Mondays and Fridays at 10pm EST. She also plays a lead role in many other companies such as her fashion design, personal shopping and stylist company, “Her Highness Images”, her freelance writing company “Queen’s Pen” and is also in the process of implementing a women’s book club “Erudite Aphrodite”. She is working towards her degree in Graphic Design and has many other goals and plans for the near future including re-starting "Acoustic Affairs" which is currently on a short hiatus. Queen Unique is currently working on the second book, "The Tracks of Life: Inside-Out", a fiction novel, "Chastity Belt" and a children's motivational short-story series, "This Little Light of Mine" with illustrations by her daughters. Katrina is a self motivated woman focused on her goals and manages to do these things all while being a very involved mother. Queen was a featured speaker at The Bridge Youth Center, has written articles for magazines, done various radio interviews and was recognized as TimBookTu.com's writer of the month for March 2008. Queen Unique has been highlighted in many capacities including but not limited to Neo-Lystically Speaking's Wassup Wednesday newsletter and SOMSistahs "In the Spotlight" blog feature.

Katrina can compose a diverse array of original pieces of prose ranging from love, sex, heritage, black history, religion, politics or life itself in general therefore; there is no limit to her subject matter.What Queen Unique does is in a genre of its’ own. It can’t be classified as poetry, hip hop, spoken word, rap, soul, prose or R&B. It bridges the gaps between all of these into that perfect equilibrium. Her Christianity dashes a hint of gospel into her tone, her heritage and ethnicity lays down a hint of soul and jazz, heartache and love brings the flavor of R&B and her beauty, maturity and sexuality are undeniable. All of these components plus more combine to make her into true royalty.
This is QUEEN UNIQUE.

The sequel to A Mile in My Heels, titled "The Tracks of Life: Inside Out" is set to be published in 2008, followed by her first fiction novel in late 2008 and a series of motivational stories for young, ethnic girls in 2009, titled "The Little Light of Mine" with illustrations by her daughters. Her trilogy CD: "Queen Speaks: Spirit, Heart and Body" has a tentative release date of June 2008 so please stay tuned for more.