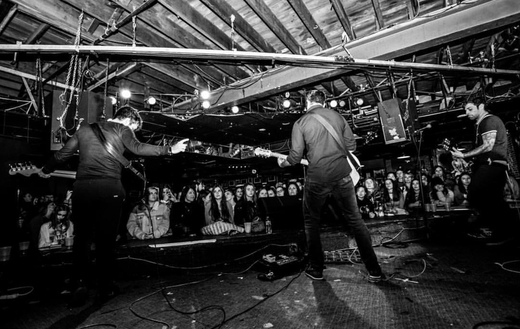 When life becomes a series of “Fight or Flight” and “Sink or Swim”, will you be up for the challenge? Long Island pop rock outfit PRSNA certainly is, emerging from the shadows & swinging with a vengeance.

PRSNA defines the triumphs & tragedies of life through melodic vocals, infectious guitars & a blood rushing rhythm that dresses modern pop punk with their indie & pop rock roots handsomely, yet so rebellious in the same attire.

Since 2011, PRSNA has released 2 EP’s, 10 singles accompanied by music videos & have shared the stage with acts such as Third Eye Blind, Twenty-One Pilots & Envy on the Coast. They returned from a brief hiatus in 2017 with a fresh lineup & a better understanding of their sound & who they are. “We were putting our hearts & souls into this & our personal lives were taking a toll & falling apart”, explains singer Tom Spartinos. “Taking a step back from this part of my life for a little hurt, but I needed that period to fight my demons & heal the wounds in my personal life” adds guitarist Costas Themistocleous. In 2018, a lawsuit was filed against the group by an artist going under the same name “Persona”. They decided to settle the matter civilly & change their name to PRSNA.

PRSNA, now firing on all cylinders again will be releasing one more single, an acoustic EP & a DVD documentary before heading to The Barber Shop Studios in January 2020 to record their long awaited 3rd EP with Gary Cioni. PRSNA will be taking their all new live performance on the road all throughout the year. Their revitalized live performance is described by the groups manager as a “climactic experience with visuals, theatrics & an out of the box presence that will capture & retain the audience-attention for weeks to come”. Outside of music, PRSNA will be releasing a cartoon series & 2 mobile phone games by the summer of 2020.

The new era of PRSNA has arrived and is here to shake up the industry. Between their new single “Cut Throat” & a sneak peak of all that is coming, I can thoroughly say that PRSNA has found themselves collectively as artists. The only questions remaining, will you follow their lead? Are you ready to face everything & rise?