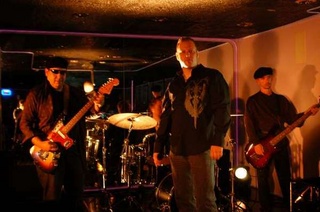 Blue Moon Harem is the Boston-based band formed at the end of the last decade by the free-thinking individuals, Jonathan Bix and Demetri Joannou, each actively seeking to challenge themselves and their listeners through a unique and captivating sound propelled by a spellbinding stage performance. Blue Moon Harem’s self titled first album is a remarkable collection of creativity un-categorizable modern music.

Singer/songwriter Jonathan Bix is the voice and soul of Blue Moon Harem. On the eleven songs, Jonathan delivers a towering yet vulnerable vocal performance which mesmerizes and captivates audiences everywhere.

Guitarist Demetri Joannou, the band’s co-songwriter, along with Jonathan, writes the incredible music that is the heart of Blue Moon Harem. Demetri deftly combines keen instinct with raw talent to create passages of atmosphere, beauty, and power.

Brian MacDougal rounds out Blue Moon Harem’s powerful lineup on drums and percussion. Brian adds a unique balance to this band’s dynamic sound and creativity. Also acting as a backup vocalist for the band, Brian’s talents are endless.

In the last few years, praise for the bands first hit, Addiction, has quickly spread all across the New England states. Beginning with airplay of this pulsing alternative-rock hit on WAAF’s local radio music show in Boston, along with the band’s other hits, Ride and Dog’s Life, Blue Moon Harem’s popularity has built to such a level that their music has been featured in the independent film Under Surveillance from New York based Fourth Horizon Cinema and other films from Sorry Dog Productions.

Many people wonder how a band as creative and constantly changing as Blue Moon Harem can hold it together amid the rigorous demands of becoming a major national touring band. But really, the recipe is simple: close friends, a passion for music and a shared desire to transcend the average perception of daily life by creating something brilliant and timeless together. And share it with you. That’s what this band has set out to do. Join the harem. The Blue Moon Harem.

The band is currently in the studio working on their second CD entitled "FINLAND" which is due out in May of 2009.
The sound is a mix of Dark and Light moods in a genre they call Acoustipopaltrock.

FINALLY SOMETHING NEW AND AUTHENTIC! by STAN THE MAN - CD BABY
From the moment I put this CD on I was blown away. Simply amzing. Superior musicanship and sound quality makes this cd a must have.the songs are extremely catchy yet never cheesy..I cant say enough...
Blue Moon Harem by INDIE IN-TUNE MAGAZINE
The Boston music scene has been described as constantly changing, offering a little bit of something for everyone. With such a range of music available in the area, and with new artists emerging...