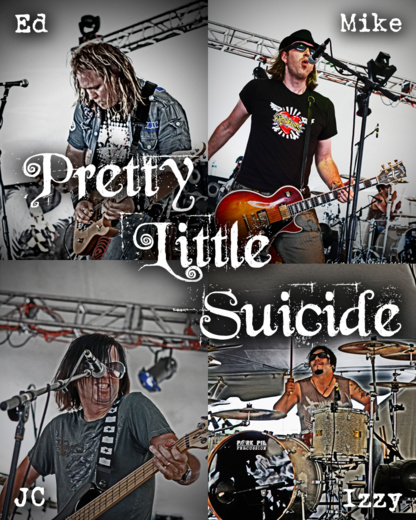 Singer/lead guitarist Ed Earle leads the band with a distinctively edgy voice that oozes with attitude and emotion, interspersed with blistering solos that redefine shredding. Complimenting him on rhythm guitar is Mike Patton, whose subtle interplay and dirty raunchy riffs reassure that rock guitar isn't a lost art. Rounding things out are JC, a bassist whose natural rhythm and groove are only exceeded by his boundless energy, and Izzy Rock, an extremely dedicated and hard hitting drummer. With members that have lived in both Boston and LA, PLS blends East Coast grit with West Coast attitude and flash. The band's influences span five decades - from 60s classic rock, to punk and arena rock from the 70s, to 80s metal and glam, and heavy goth-industrial rock from the 90s. Add in a dash of modern day chart topping pop, and you have Pretty Little Suicide.

3 vocal mics in the front