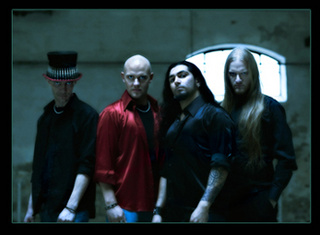 Michael was born in Vejle and grew up in Grinsted which are towns in the southern part of Denmark. He also lived in Bergen, Norway, for a few years where he actively took part in the music scene. Now he is situated close to his roots in Denmark. He is a fully trained tiler/roofer. He has dedicated his life to making a living of recording and performing music.

The interest of music started as Michael was eight years old and got his first record player with a vibrant pink Elvis record. This ignited the spark and love for music that would determin Michael’s life.

At a young age Michael was drawn to hard rock and the heavy sounds made his heart beat. He played keyboards, sang and played guitars. Ultimately at the age of eighteen he found his place as a bass player. Michael has played on every thinkable stage in Denmark. Big or small, he rocked them all.

Michael’s unique bass playing style is the foundation of PHONOMIK’s hard rocking sound. He is in possession of immensely good hearing and experience which contributes as a supporting pillar to the band. His enthusiasm and professionalism paves PHONOMIK’s way for higher levels.

Album finished. by
PHONOMIKs Soul Creeper is finished. Uploaded Massacre and Menter Fire here on OurStage..listen to other songs on Myspace.com/phonomik - reverbnation.com/phonomik - sonicbids.com/phonomik
PHONOMIK publish cover artwork by
PHONOMIK publish cover artwork and reveal the title of their debut album "Soul creeper" check it out on their myspace pagemyspace.com / phonrocks
Soul Creeper release date has unfortunately been postponed until 23/4-2010 by PHONOMIK – NIGHTMARE RECORDS News:
PHONOMIK – Soul Creeper / release: 23.04.2010NIGHTMARE RECORDS News:Diversity and experience and most of all passion make PHONOMIK's music vivid and intense. The style is a culmination of timeless...