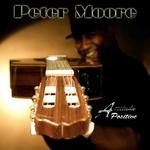 “Everybody has a story. My job is to help them tell it; and to help their listeners feel it.”

Peter Moore is a storyteller who paints musical pictures without words; and when words are necessary, he frames them with just the right melodies to bring clarity to the message. Peter is a producer, a composer, a songwriter, a multi-instrumentalist, and last but certainly not least, an amazing guitarist who actually becomes “one” with the music he creates.

“I see every musical work as a wonderful piece of art that is no different than a great sculpture, a breathtaking painting, a one of a kind photograph, an amazing film, or a stunning piece of architecture. Its value is in its function, and in the joy it brings to those who have a chance to experience it. When you put your life into the work, the work will change lives, and that’s work worth doing.”

The Boston born composer has had an opportunity to live and or work throughout the United States from Michigan to Texas, New York to the Carolinas, and Los Angeles to Atlanta. He has also had the good fortune to travel abroad from Europe to Africa and as a result, has been able to experience a myriad of cultures, many of which have influenced his work.

Peter has been a studio guitarist on projects for some of the biggest names in music including, Elton John, Aaron Neville, Roberta Flack, Michael Bolton, CeCe Winans, Boyz II Men, The Tony Rich Project, Xscape, Anointed, Pebbles, Monica and G. Money. He has worked with many established producers as well from Jermaine Dupree to Organized Noize. He co-wrote a song for the hit television series “Mad About You” starring Paul Reiser and Helen Hunt. He also scored two feature films including a former Grand Jury Prize Winner at the Sundance Film Festival, “Chameleon Street.”

Peter credits a number of influences for his unique sound beginning with Earl Klugh whose rich melodies and crystal clear sound prompted Peter to focus extensively on classical guitar. He is grateful to Bob James who took time to meet with Peter on the practice greens of the Grand Blanc Country Club to discuss music and Peter’s career. Having always admired the smooth productions of James, his advice was all the more appreciated. Peter also credits Jonathan Butler for putting passion in every melody. Tony Rich who gave Peter a great musical pallet to paint his own musical colors on, Maurice White whose Earth Wind and Fire productions painted magnificent images for the heart and soul with every note they played, George Benson who inspires everyone who has ever aspired to play the guitar, the great Stevie Wonder who lives every song he writes, and of course, the masterful Quincy Jones who literally wills some of the greatest musicians of our time to contribute to his amazing vision. Each of them has a measure in Moore’s musical development.

As a road musician primarily for the Tony Rich Project, Peter got to meet other music greats opening for Tina Turner and Sting among others. He learned the differences between the road and the studio, and performed before audiences from small clubs, to large outdoor venues with as many as 100,000 people. He was also afforded the opportunity to play on television appearing on “Dick Clark’s Rockin’ Eve,” at the Super Bowl, the Fiesta Bowl, and the Olympics, as well as a number of nationally televised programs like The Tonight Show with Jay Leno.

Peter has utilized all of his experiences to prepare him for his most current endeavor. He has produced work on four album projects that are all slated for release this quarter. “Snapshot” is the first of the four. It is a smooth jazz offering for a great trumpet player named Charles Nix ( www.kiamanijazz.com ). Peter co-wrote all twelve pieces with Nix with a contemporary focus that is soulful and intriguing. The second project is a new form of music called “Cowboy Soul” introduced on an album called “Light to Dark” by experienced country singer Steve Kolander ( www.kolander.com ). Moore took an urban approach to country that has created a sound that’s warm, syncopated and musical. It promises to be an exciting experience for the listeners.

The third project being released this quarter is called "All About Love", by Carmichael, an amazing singer/songwriter and producer who Moore was blessed to work with on several songs of his album. The project is soulful, and smooth from front to back. Lastly, the final project is Peter’s introduction as an artist to the music buying community. The album is entitled “Attitude Positive” and it is a spirited showcase of Peter’s guitar mastery ( www.myspace.com/petermooreproductions or youtube.com/youpetermoore ). It paints a portrait of the joys and challenges of life through the vision of a person with a positive attitude. Peter’s virtuosity is clearly demonstrated within the framework of a series of fascinating musical scenes that create the perfect backdrop for melodically navigating through this rollercoaster called life, while ultimately ascending in a positive direction toward your destiny. The project is smooth, while at the same time, playful and thought provoking. In experiencing his work, his philosophy, and his passion, it is clear that Peter will be making his mark on the music industry for many years to come.