BIOGRAPHY
PAR~A~DIGM sometimes recognized online as (Paradigmrocks, par-a-digm, par a digm), is a popular rock band from Las Vegas, Nevada. Founding group members Reggie (lead singer, guitar\songwriter), Allen (lead guitar), Robert (Drums), and Andre (Keyboard/DJ) formed in 2008. Soon after the band progressed, another member was added, a keyboardist Andre. The band originally consisted of the four brothers and took the name PAR~A~DIGM. In 2009 Szi join the band as the new bass player and after 7 years she is taking a sabbatical for a short measure of time.
PAR~A~DIGM have established themselves as one of the true positive leaders of the U.S. Rock Circuit today and has been known to leave audiences in a state of euphoria and awe with their melodic vocals, thunderous drums and guitar section. Their incredible upbeat attitude and positive energy combine to make them one of the most sought after performers today,  each member of the band contributes their influences into the music they write, this creates a range of songs in every genre from pop, rock, and hip-hop and is influence by Skillet, Nickelback and Breaking Benjamin.
After some time off with much worth of thought, the band members got a short break from performing live in order to re-invent their style and to focus on the recording of their 3rd full length album titled “Forever”. The songwriters’ skills presented again shows distinguishing characteristics of the band and why they are seen as unitary of the very best in the game. Their songs can easily relate, too many walks of life.
2014-2015 was of course a solid defining year for PAR~A~DIGM. After much deliberation, we feel we’ve come up with a great list of songs for the up and coming 2016 album. We cast to deliver creative progression, technical power with more dynamics. The singles released from the new album (Firework, Never The Less & etc.) have been doing well. With extra-ordinary songs with lyrical depth, we anticipate this to be our best project ever.
“We are grateful for the longevity and support of our fans, as we share our lives and experience with you. We hope to build on this relationship and achieve greater things together in the near future, said Reggie.”
PAR~A~DIGM released 2 Full CDs, "Paralyzed" (2009) and “Only One” (2011) and five singles “COLD” (2011), “September Fades” (2012), “Firework” (2014), “Never The Less” (2014) “Cover Song” (2015) and their newly released single titled “All I Have” (2015)
“Paradigm has the perfect name because what they are doing is a brand new paradigm in music. Their album, ONLY ONE, makes them the only band to submit an album for reviews that contains Rock, Metal, R&B, Hip-Hop and Pop songs.  I'm very impressed! “Said Senseitional, - Music Editor - IAE Magazine: 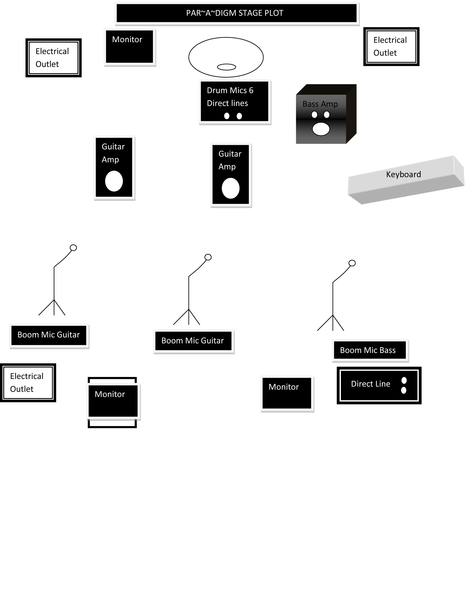 IAE Magazine by Review by: Senseitional
“Paradigm has the perfect name because what they are doing is a brand new paradigm in music. Their album, ONLY ONE, makes them the only band to submit an album for reviews that contains Rock,...
“I like your music alot, especially 'All I Have'.” by Tad Rundgren, KZHT Hit XM Denver Radio Station
“I like your music alot, especially 'All I Have'.”
New Music Exclusive Artist: PAR-A-DIGM by CCM Magazine.com
PAR~A~DIGM has been known to leave audiences in a state of euphoria and awe with their melodic vocals, crashing drums and thunderous guitar section. The group released its debut album "Paralyzed in...
The Indie Music Fest by Virgil R.
PAR A DIGM is my pick for best band. This was an all black rock group that mixed modern soul with metal and nailed everything. I wish they had more than 20mins as a few more songs would have been...
Only One Artist: Paradigm by Review by: Senseitional IAE Magazine
Genre: Outside The Box Key Tracks: Every Single Song Rating: 1 = WORST, 4 = BEST Songwriting - 4.0 || Music - 4.0 || Vocal Performance - 4.0 Paradigm has the perfect name because what they are...
Indie Music Channel by Emmy Award winning TV host, Christopher Ewing
Hey, you guys! Your music is NO JOKE! AWESOME!
Pahrump Valley Times by Kelsey Givens
Par~A~Digm took the stage with its creative sound, which was ground mostly in rock, but at times pulled elements of rap, hip-hop and R&B.Par~A~Digm is a very good band, so getting them to come...
PAR~A~DIGM Superman Complex by KIAC Internet Radio
PAR A DIGM lays down totally unique track on this one. hip tripping work.got your headset on, its different thats for sure.
KCLA FM by Uncle Earl
Powerhouse Ride.....Twisting Vocals.......Winner!"
Real Rocker Girl by "radio-ready power ballad"
This is a very nice composition. It isn't 4/4 but it still rocks, which makes it more interesting than the average rock song. The chord progressions combined with the melody and harmonies made the...
p
A
n
E
F
Song Title by Artist Name
987654d
LM
iAnEAqqqq