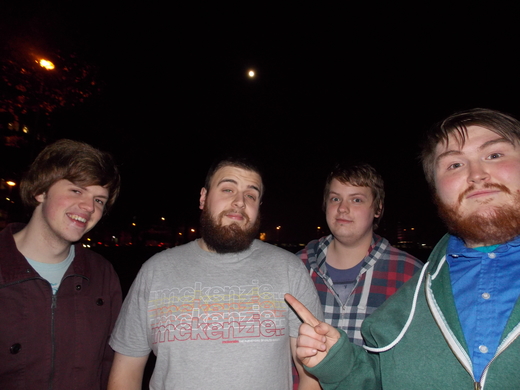 From the cold rainy east end of Glasgow,

Space, Universe, and Social problems rather than heartbreak.

Often being compared from NoFX to Four Year Strong while diving into other genres.

"If your favourite scientist was a pop punk kid in a band" sound.


Since forming in mid 2013 we managed to release our first Self-Titled E.P for almost no money at all.

The whole record was D.I.Y from booking rehearsal time to record drums rather than using a professional studio to

recording guitars and a bass at a home studio for free and spending many weekends mixing and doing vocals at another home studio.

the record was helped out by a family member who is a signed to Sony/Bmg and used his home studio.

This Is Pop Punk Promotions Sampler.

and opening for newly signed Fearless records act As It Is.

a few months our founding drummer Kieran left which put us on a hault.

we decided to take the time to write new material and audition several drummers.

so we decided he was perfect to join our adventure.

from bands being exact replicas and singing about the same girl who dumped them.

that gives pop punk a new meaning and thought.

every song we make.

beer bong each show and try and bring some fun and be interactive with the people who pay to see us.

Also we will be giving away free merch and free music to everyone who shows up to our shows as a thanks.

to the people who support us and keep us writing music.


(We can also make Andy number 2 do anything in the name of the band,

put peanut butter anywhere on your body and… yeah)


Or on any of our social medias:

Two cabs for Two amp heads each side of the stage.

Bass amp with head and cab.

Two singers one in the middle and the other on stage left.

Pedal power in middle of stage.