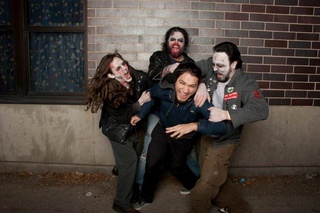 After the breakup of a previous band, Fern and Walter decided to continue on and form Mara with Jimmy and Stevematt. The line up continued up until the spring of '10 with Stevematt leaving the group. Mara then added Paco and Guerro to the line up. With a fresh new roster, Mara is branching off to other genres but keeping metal as the base. With a very energetic show, they do not disappoint leaving people with their mouths open in awe. With a new E.P. coming out soon, Mara is ready to take the city by storm.

Southside By the Town by
...get some (ear)plugs if you value your ears..." ~ MaraNow, SouthSide's at Angels & Kings for another weekly edition of the One Man(no) Show. Tonight's theme was hardcore screamo/metal rock...
p
A
n
E
F
Song Title by Artist Name
987654d
LM
iAnEAqqqq