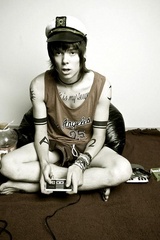 NeverShoutNever! is young Missouri native Christofer Drew. After recording an EP by himself in his basement, NeverShoutNever! became and instant online success story - averaging over 30,000 online plays a day, headlining shows throughout the Midwest, and becoming the #! Unsigned Artist on MySpace. NeverShoutNever! just put out his first real release, the YIPPEE EP, which was realeased on July 29th. Christofer has appeared on MTV's TRL, and has had featured content and gotten rave reviews on websites such as AbsolutePunk, Purevolume and The Daily Chorus.

NeverShoutNever! Review on AbsolutePunk.net by
Never Shout Never may very well be the next Ashley Parker Angel. His name is Christofer Drew (aka Never Shout Never) and his music gives acoustic-pop a blast of emo-punk with his 4-track release...
p
A
n
E
F
Song Title by Artist Name
987654d
LM
iAnEAqqqq