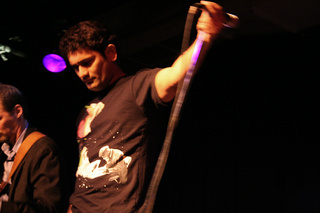 Nero is a Bangladeshi-American singer and songwriter. His journey began with little more than a raw desire to understand life and the world around him, but it was not long until this led him to his calling: music. He found inspiration in the passionate screams of Qawals, eastern spiritual singers such as Nusrat Fateh Ali Khan; through the intoxicating musical journeys of Ravi Shankar; and through the irresistible pop beats and powerhouse guitar bands, such as U2, of the west.

Nero surrounded himself with music, and it became a fundamental part of his life as he grew up. Through high school chorus and music lessons as well as fronting several small bands, he began to recognize the knowledge and experience that he lacked, leading him to pursue an arts education at the New World School of the Arts in Miami, Florida. There, he studied musical theatre to gain a more comprehensive understanding of performance and communication while continuing to develop his voice.

In the years that followed, Nero departed from his life in the arts to work in the financial industry, but music never left him. While working hard to achieve the financial independence necessary to pursue his dreams, he constantly found himself scribbling down pieces of lyrics and music, whenever and wherever inspiration struck. He gradually amassed material until, in May of 2003, the moment had arrived. He embarked on a four-year journey of self-expression, experimentation, and determination that culminated in the release of “Nine.” Nero’s autobiographical debut is the product of a life driven by music.

As its title would suggest, Nero’s debut record can be viewed as either a very simple or a very complex work of art. “Nine” describes the number of songs on the album, but it also carries a deeper meaning: in numerology, it represents the cycle of life. Similarly, the music can be enjoyed for its infectious pop beats and catchy refrains, but its true depth lies in its experimental fusion of cultures and emotionally raw lyrics (which, appropriately, are based on Nero’s own cycle of life). These nine songs showcase his wide vocal range, skilled musical arrangements, and unique world view combining eastern influences with western pop sensibility. “Nine” marks the first professional steps into the music world for a new artist of tremendous potential.