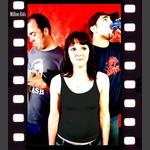 BC (guitar, vocals), originally from Las Vegas, loves thai food, small fluffy dogs, music, and watching paint dry.The main creative in the group, BC, finds his inspiration from the crazy world around us, and wished he could do backflips on command. A graphic designer by day, he makes the majority of artwork for the band, as well as many other bands. Kim (bass, vocals), has been taking names since BC and her released their first demo (Fred Wise) that got played on KXLU back in the late nineties. She loves dry cereal, hip fashion and cream cheese wontons. She grew up in Hawaii, so watch out, she'll crack a shaka all over you. Josh (drums, vocals) loves plaid drum kits and ladies named Dorothy. 300 horsepower on the skins, and winking at girls mid drum roll are his specialties. If you ask, he might grow back his sick mustache ala Reno 911. Josh and BC used to play together in another project called Vinyl Jesus, and when Million Kids needed a new drummer Josh was the natural progression.

Recently they picked up an endorsement from Knucklehead Strings and received radio play in Greece, on one of their national radio channels. They have been lucky enough to share the stage with The Faint, Lou Barlow, The Warlocks, Ted Leo Pharmacists, Chokebore, Devics, Camera Obscura, Black Pine, Broadway Calls, The Health Club, Whirling Dervish, D-Strutters, Murderland, Ex-Paladin and many other great local bands.

They received airplay on KCRW and KXLU on their last release ARRIVALS DEPARTING FLIGHTS back in 2001 and toured the west coast building their fan-base until the beginning of their hiatus in 2002. Now they are out there doing it again, planning trips up to Seattle and back, and also looking towards a possible european venture next year. They have played a lot of the Los Angeles area venues: Spaceland, The Roxy, The Troubadour, The Knitting Factory, Silverlake Lounge, The Derby, Koo's Cafe, Charlie O's, Casbah (San Diego), Double Down (Las Vegas), King Neptune's (OC), Suzy's Bar & Grill (Hermosa Beach), Fern's (Long Beach) and many more. They are currently recording their new collection of songs, to be released next year.

"MILLION KIDS is a loud abrasive trio from Redondo Beach whose EP, ARRIVALS DEPARTING FLIGHTS, is as infectiously snotty as swine flu. This disc gets very high marks for brash catchiness. "Starchrusher" and "Quint" have picked up airplay on KXLU and if this outfit fais to break huge, it's all your fault. Avoid a lifelong guilt trip at www.millionkids.com or 310-570-7326." - Ron Garmon , Mean Street Magazine Feb/2001