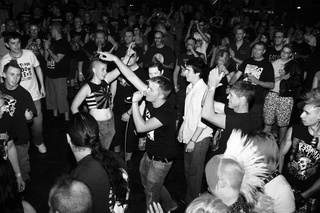 Middle Finger Salute began in September 2005, then aged 13 and 15 the band made a name for themselves in the UK underground punk scene supporting bands such as Stiff Little Fingers, Cock Sparrer, Buzzcocks, Misfits and many more. Since then the band have been the youngest and only unsigned UK band on the Vans Warped Tour, doing this both in 2009 and 2010.. as well as appearing on the official tour compilation through SideOneDummyRecords both years. The band toured with The Blackout and The Briggs in late 09. The band did 4 showcases @SXSW2010 and have since played a number of festivals and supports as well as a headline UK and European tour hitting major venues across the lands. The band are currently working on their latest album.

Middle Finger Salute @ SXSW by SXSW Artist Info
Middle Finger SaluteBlackburn UK-Englandhttp://myspace.com/middlefingersalutebandMiddle Finger Salute are based in Blackburn, England, At the ages of 17 and 19 the band have already been part of...
Warped Tour CD Review by
Middle Finger Salute + SLF 2007 by Review.. Early Review
All fingers and no thumbs here. Middle Finger Salute have an average age of sixteen, but sound well beyond their years. Very much into the old spirit of punk; the front of the crowd may be...
BUZZNET SEARCH by
http://www.buzznet.com/www/postsearch/?q=Middle+Finger+Salute&username=&dstart=2003-01-01&dend=2009-10-21&sphotos=on&svideo=on&sjournals=on
Big Cheese Magazine - Best of 2008 by
In January 09s Big Cheese Mag, we were featured on the Best of 2008 Covermount CD..alongside bands including Gaslight Anthem, Jackson United, Airbourne, and Cancer Bats.The article reads as this:

Another CD Review - What We Live For by
Another Cd reviewMIDDLE FINGER SALUTE, Blackburn, UKCD Review: “What We Live For,” Nov 2008CD Review by: Jillian Abbene Richmond VA/Wash DCYoungpunks, you don’t have to be a veteran to have...
Rebellion Festival - Big Cheese best picks. by
Full Review of Rebellion (www.vivelepunk.net)/Big Cheese MagBlackpool Winter GardensAugust 7th – 10th Three months after the two day extravaganza that was Spring Rebellion 2008 in Vienna,...
ESPN - interview and song by
Interviewed on the Action Sports pocast dated September 2nd, about Warped Tour etc, interviewed by Rick Thorne, and plays some MFS music too.
p
A
n
E
F
Song Title by Artist Name
987654d
LM
iAnEAqqqq