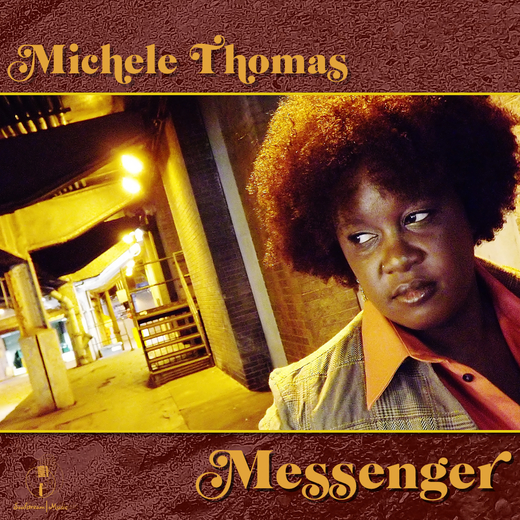 "(She) has her own vocal sound, which is beautiful by the Grace of God."

From this daughter of a minister and progeny of Chicago’s gospel saturated Church of God In Christ (C.O.G.I.C.) denomination, it's no surprise that conscientious, message-filled music would be at the heart of her aesthetic milieu.

After years of working to establish her name in the Chicago jazz scene with her 1999 debut album, "I'LL TAKE ROMANCE", Michele has emerged with a new outlook on the state of jazz music...one that has lead her to blend a mixture of gospel, soul, and jazz, by which she strives to expand her appeal to a more diverse audience. Having already performed in some of Chicago's legendary music rooms, such as The Green Mill and Green Dolphin Street, she's already started out on solid ground.

“Message music” is a musical genre with a political, religious, or social message, the likes of which have always been a mainstay in Stevie Wonderʼs repertoire, and still ring true today. Considering the countless covers of Stevie Wonder's songs to date, "MESSENGER" seeks to promote the significance of his socially conscious music, despite an ever-changing society.

Although many critics and record execs held the opinion that "message songs" couldn't be popular, Wonder made songs with political, religious, and social topics which became hits. As Michele says, "...Stevie just clobbered the notion that a message song doesn't have mass appeal - and he did it by writing hit after hit of conscious-centric songs."

Thomas's unique mixture of musical influences comes through in this newest CD, which takes on some of Stevie Wonder’s finest pieces— songs that were carefully hand-picked to highlight the transcendent as well as politically charged subject matters which encompass such a great portion of Wonder’s body of work.

"MESSENGER" delves into the introspective mind and spirit of Stevie Wonder's compositions with reinterpreted pieces that are transported through the contemplative and soul-tinged vocals of Michele Thomas.

For this project, Thomas re-enlisted her most trusted and long-time collaborators: arranger Neal Alger - noted jazz guitarist and member of The Patricia Barber Quartet; and prominent drummer/ percussionist (as well as her husband) Darren Scorza, who also debuts his role as producer on this album.

Also coming together on this project are some of Chicago’s finest, such as bassist Bob Lovecchio, pianist Chris Mahieu, saxophonist Matt Shevitz, and trumpeter Joe Lill. Classics such as "Higher Ground" are given an "Isaac Hayes" treatment with funky guitars and gritty horn riffs, while more obscure tracks like “They Won’t Go When I Go” and “Big Brother” explore the most contemporary sounds of the Afropop movement.

But, fasten your seatbelts, because the exploration does not stop there. Michele also showcases the works of two other jazz composers, Hal Galper and Enrico Pieranunzi. Here she lends her lyrical supplementation to their instrumental works, “Triple Play," along with the lovely bossa, “Dee Song."

Thomas, who is very much an interpretive vocalist in the style of Dianne Reeves and Cassandra Wilson, has a clearly visible love affair with the improvisational spirit in music; the spirit that drives not only jazz, but all its multiple infusions of gospel, R&B, blues, and rock. All of these, of course, have been at the bedrock of true American classical music, but this also speaks to Michele’s many musical influences. These influences range from contemporary gospel greats such as Richard Smallwood (who, coincidentally, she shared a stage with at Pick-Staiger Auditorium in fall of 2006), to singer songwriters such as James Taylor, on to the soulsters like Donny Hathaway, and all the way to the definitive jazz singers such as Ella Fitzgerald, just to name a few.

For an artist with a uniquely patch-worked background, having come from the rich heritage of gospel music and being an ambassador of the idiom through leading and founding her college gospel choir, to traveling to Europe to perform and teach gospel to Scandinavian audiences to her current burgeoning onto the Chicago jazz scene in which she's carved out her place in the city's music community, Thomas brings every part of her distinctive background into each performance she gives.

For Michele, creating and recording "MESSENGER" was truly a labor of love. She shares of her song choices that, “I’ve always appreciated that Stevie Wonder challenged the status quo when it came to social justice and religion as it relates to spirituality. I was both amazed and unsettled with how directly relevant the messages in his music are, even in our current times. Seems to me those messages bear repeating…”

Featured Artist: Michele Thomas by JazzReview.com
CD Title: I'll Take RomanceYear: Reissued in 2006 - Originally Released in 1999Record Label: IndepedentStyle: Jazz VocalsReview:Vocalist Michele Thomas is one of those new artists that you...
Michele Thomas by JuliansFlight.com
(Michele has) a serious vocal gift.Stevie's "Where Were You..." tookon the colors of autumn with(this) graceful unplugged unit.Patient, mature accenting; boththe voice and the feeling together....
Amazon.com Review by Jelani Greenidge
As Kornheiser would say, "clahhh-sic", January 16, 2004As debut albums go, this one is especially strong. Michele has wonderful control and excellent use of tone color. The songs are a good mix of...
"Holmgren, Thomas Honored During Homecoming" by www.covchurch.org
The Evangelical Covenant Church MagazineCHICAGO, IL (September 25, 2006) - Michele Thomas ...CHICAGO, IL (September 25, 2006) - Michele Thomas was just a freshman when she organized and directed...