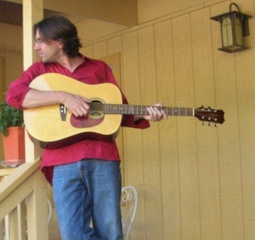 The debut EP by Michael Maguire is entitled Ah, Semplice. Semplice [sem-plee-che] is a musical term suggesting playing in a simple and straightforward fashion. Though this style is infused throughout the music, his songs are far from plain and easygoing. Listen to hear reflective phrases and deep lyrics that have been long absent from music in recent times.

Even from a young age, music has always been a major part of Maguire’s life. There was always something around for him to both listen and absorb. After basic introduction to piano, Maguire soon found the guitar to be far more appealing. He transferred his knowledge onto his new instrument, and soon he was practicing for hours and hours, often playing along to classic records that he’d borrowed from his father.

As Maguire honed his skills, he soon discovered there was more to music than just the sound of a song – there was also the message. From there he took to studying words and poetry as well. He found that most of the modern music was great sonically, but was lacking any real meaning to him, unlike the songs from the records he grew up with.

What you hear from Maguire is a blend of both a classic and modern sound, paired with poetic lyrics that take you through the journeys of his mind, thoughts, and beliefs.