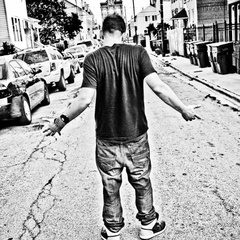 He's racked up over 140K hits on his site while being featured on major urban blogs, gotten spins overseas in the U.K. (98.7FM), and is set to debut on EMINEM's satellite radio station Shade 45! Have you caught up with the buzz surrounding Mike Petro, aka meLLo? Indie music fans are beginning to discover a fresh new sound & swagger to rep the Midwest in original fashion! meLLo is building a reputation in cutting a fine blend of underground hip hop, club anthems, and commercial raps. The blueprint of his style was inspired by a combination of house and hip hop artists of the 90's. Lyrically, he flips his flow pattern on a dime as he mixes meaningful stories with recklessly unconscious rants. Armed with a pen and a pad, this unpredictable character pushes the boundaries of modern vocabulary as few can deny his versatile wordplay and razor sharp delivery.

Chicago's Independent Music Review by Author: Jason Petros
meLLo is a talented producer, who obviously knows his way around the boards - his remixes are of top quality...the sky’s the limit for a guy of this talent"
p
A
n
E
F
Song Title by Artist Name
987654d
LM
iAnEAqqqq