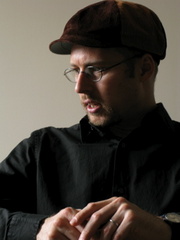 All About Jazz by All About Jazz
By Terrell Kent Holmes Noted keyboardist, group leader and ubiquitous sideman George Colligan has applied his chops to the Hammond B-3 with his latest release, Mad Science, which is also the name...
from All About Jazz by AAJ
George Colligan's Mad Science | Sirocco Music Limited By John Kelmanprint email Since emerging on the scene a scant ten years ago, pianist George Colligan has built the kind of body of work that...
Downbeat 2005 by Downbeat
George Colligan’s Mad ScienceRealizationSirocco Music 1030a**** (Four Stars)Thick,pulsating and high velocity,Realization is a slammin’ good time.Pianist George Colligan-a prodigious sideman and...
Mojo 2005 by Mojo 2005
George Colligan’s Mad Science**** (Four Stars)Realization( sirocco)Dark, blistering groove fusion from keyboardist Colligan, better known for polite acoustic outings with Don Byron and Cassandra...
Washington Post Review of Mad Science at Blues All by Washington Post
George Colligan didn't sound entirely like himself at Blues Alley on Wednesday night. For one thing, he didn't play piano. No doubt that surprised some folks who became acquainted with him when he...
Mike Joyce review of Realization by Washington Post
Mad Science is the product of George Colligan's split keyboard personality -- or at least the half that has trouble sitting still.Don't look to "Realization" for reminders of the Maryland-bred...