This native Texan singer/songwriter has always enjoyed playing the guitar and writing songs as a diversion from his various occupations as a school teacher, a professional rodeo cowboy, a railroad engineer, and a farmer. When his banker told him to do something besides farming for a living, he decided to record and sell the songs he had written on the back of a train order. What followed was the release of his first single “Don’t Tax My Beer”, which led to concert openings for such names as Marie Osmond, Bobby Bare, and Larry Gatlin. Mack then entered Nashville’s Stargem Recording Studios to record his first album, “Different Situations”, which garnered two Billboard chart songs; the title cut “Different Situations” and Mack’s remake of the Floyd Tillman classic “Slippin’ Around”. The “Different Situation” video won the prestigious Lone Star Award at the Houston International Film Festival, and received airplay on The Nashville Network and CMT. “Here’s a feller from the heart of Texas. His songs are from the heart, and you’ll know what I mean if you’ll just listen to Mack Abernathy….a pleasure to be a part of it.” This comes directly from renowned CMA Instrumentalist of the Year Johnny Gimble, one of the many master musicians that have played with Mack, not to mention Hall of Fame steel guitarist Tom Brumley, formerly one of Buck Owen’s Buckaroos, who headed up Mack’s top-notch band for quite some time. Well-known Nashville record producer, Vic Clay, who produced the “Different Situations” album, is putting the finishing touches on Mack’s new album, "Fire on the Line", which is due out in July 2007. Mack will once again hit the road to promote this new CD, this time carrying with him his custom-built mobile stage trailer. This stage trailer, hand built by Mack, his wife Jessie, and Mack’s guitar player and close friend Kenny Zink, is a 53’ semi trailer that hydraulically converts to a stage, complete with sound and lights, which enables Mack to take his show virtually anywhere. (View this rig at www.prizmstaging.com) Mack’s Abernathy’s music has always been received well in country radio. Jerry King, former Program Director and current radio personality at KKYX in San Antonio, had this to say: “Mack Abernathy is the kind of singer and songwriter that country music is all about”. Bill Kinder, KSCS-Dallas radio personality, says, “Mack has talent and a down home attitude that relates to his listeners on a personal basis.” Mack has combined his singing and song-writing talents to create a country style that is all his own and one that his fans really enjoy and repeatedly want to hear. 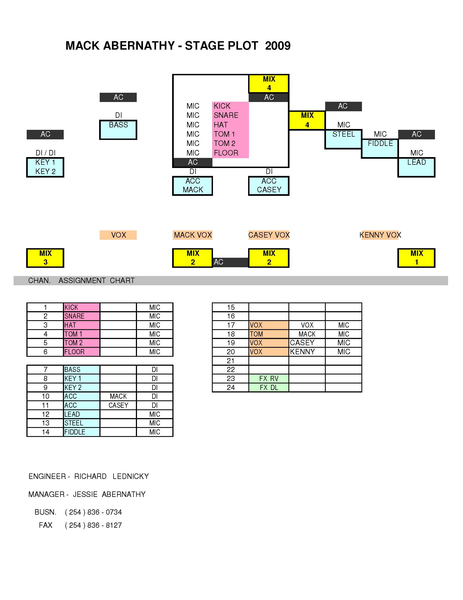 BOSQUEVILLE NATIVE EXHIBITS A TRUE INDEPENDENT SPI by
Mack Abernathy attributes his independent spirit to many of the basic things he learned as a kid, born and raised in Bosqueville, Texas. The “can do” attitude quickly developed from growing up in...
p
A
n
E
F
Song Title by Artist Name
987654d
LM
iAnEAqqqq