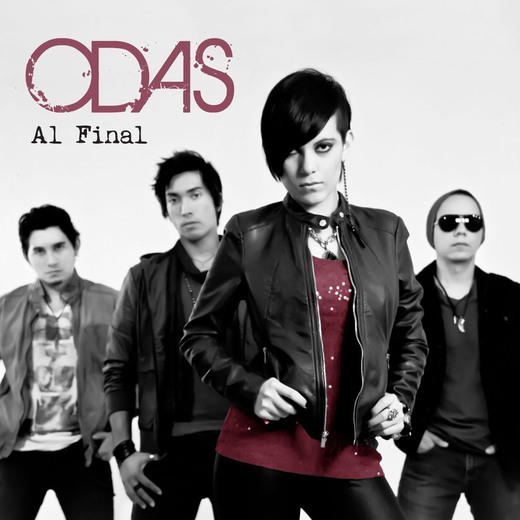 Considered one of the 10 best new artists of 2010 by RADIOCAN, Rock/Pop band ODAS promises to add their grain of sand in the immensity of today’s popular music.
Their debut album “Al Final,” was released under the independent label MEGAFONO RECORDS and produced by Baltazar “Balta” Inojoza (Ximena Sariñana, Luis Fonsi, David Bisbal, Ricky Martin, Los Claxtons).   The record has been warmly received within the Latin public and thanks to this ODAS participated in the 2011 VIVE TU MUSICA with 5 reality show which was broadcasted by LATV and exposed them to a broader audience in the U.S.   In the summer of 2012, ODAS was selected by TARGET to be part of a promotional radio campaign broadcasted nationwide.
Formed in Miami, Florida in 2005, ODAS is the distinct voice of Karla Iriarte, who brings to life the carefully crafted lyrics of Victor Hugo Muriel (Guitar/Vocals) along with the collaborations of her brother Carlos Iriarte (lead guitar), and Camilo Machado (Bass).   The brothers Iriarte and Victor Hugo hail from Cochabamba, Bolivia.  Camilo is from Bogota, Colombia; and Jose from Dominican Republic.
Pop ballads such as the first single off the album, “Tengo” and “La Verdad de Tu Mentira” provide cunning lyrics that speak to the heart of another in the longing for love and understanding.  The melancholic “Me Tengo que Ir” is a stripped down song that brings Karla’s bare voice to the forefront with the gentle accompaniment of Victor’s acoustic guitar.   When listening to the album, it would be impossible to escape the message behind the socially conscience driven song “Desvaneciendo.” This song is the ultimate hymn against what the band considers to be the ‘devastation of mother nature.’  In “Desvaneciendo,” the band fuzzed together the traditional Andean sound with modern pop/rock by introducing instruments such as the charango (played by Fernando Torricos of Kjarkas y Tupay fame) and pan flute (played by Rodolfo Quiroga of Fortaleza).