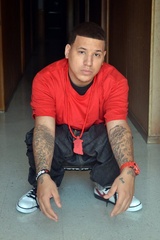 LiL ONE THE CHAMP

LiL One The Champ is from the capital city of Baton Rouge, Louisiana under the label of 3rd Life Music. Filled with inspirations and influences from artists such as Nas, Jay-Z, J. Cole, Big L, Scarface, UGK, Outkast, Max Minelli, Hot Boyz, and 2-Pac the music career of the lyrically gifted LiL One The Champ began to develop early in 1998. Determined to be successful for his single mother and family he translated the struggles of his life into captivating heartfelt hip hop music. His passion and craft soon became a local commodity in Baton Rouge landing works with notable labels and artists. Motivated with the support of the city on his back it is without question that you will find LiL One The Champ paving his way to being one of the "greats", emerging from the heart of Baton Rouge, Louisiana.

Review of LiL One The Champ by A&R - Paul Michaels
An excellent concept of "Juicy ft Airee" to pay tribute to a hip hop mogul while maintaining a foundation of originality and substance. Lyrically I feel like you painted a vivid storyline of a...
p
A
n
E
F
Song Title by Artist Name
987654d
LM
iAnEAqqqq