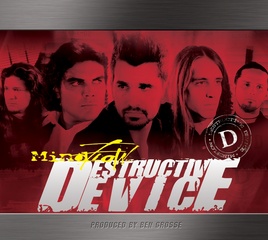 Formed in 2003, the Brazilian band MindFlow built a massive following back home, on the strength of two hit releases, 2004's "Just the Two of Us…Me and Them" and 2006's "Mind Over Body" and it quickly became apparent that MindFlow is not your predictable rock band. Case in point, an ‘alternate reality game’ (ARG) that was tied in with their sophomore effort, which included an intense storyline that involves an imaginary serial killer. (www.mindflow.com.br/followyourinstinct).

And the quintet has already in its story 4 tours abroad, having played in countries like South Korea, Norway, Belgium, England, Spain, Canada and United States.

MindFlow's new album, Destructive Device, is more than just an album packed with socially critical ideology. It is a project boiling over with aggressive lyrics and themes.
The device is one of the clues, the piece of a puzzle that lead to the discovery of an intricately woven web of intrigue. While preserving the band's musical style and direction, the tracks take on a more classic form without losing the band’s signature style, mixing young, modern and innovative lyrics with the musical power and excellence of its members.

Destructive Device was produced by Ben Grosse (Marilyn Mason, Slipknot, Disturbed, Breaking Benjamin, Sevendust) and was recorded and mixed both in Brazil and Los Angeles (The Mix Room).