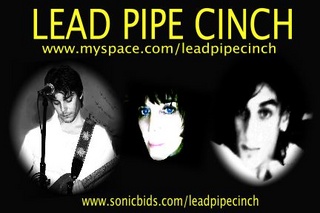 The members of Lead Pipe Cinch include the song-writing team of
Deborah Trabolsi, Frank Severino, Nick Roche and Peter Severino.
Their sound and songs are a mix of many genres - as one editor writes:

"The NYC-based band has a sound that can only be described as original and guitar driven, since the sheer variety of styles utilized is mind-boggling. Think Blondie meets Clapton, Joan Jett meets Allman Brothers or even Spiderman meets Santana."
- SARAH WILLARD, EVENT MAGAZINE (SEP 24, 2008)

The founding members of Lead Pipe Cinch actually met through Lenny Post @ Hickory St. Studio in Blauvelt, NY. during a recording session.
The 4 musicians began collaborating and writing songs for TV/Film destinations that included a mix of many genres.
Together they formed "LEAD PIPE CINCH!"
Their song "Johnny Delgado" was recently chosen from a contest of thousands to be published & placed on a nationally released CD compilation through Spacedog & Top Cow Productions. The comic novel & CD soundtrack "Johnny Delgado is Dead" written by John Leekley, Michael Olmos and Roger Minchoff, (The Covenant, Spawn, Splinter) are being showcased at NY and San Diego Comic Conventions.
The novel & CD will be available in Barnes & Nobles & other major Dept. stores throughout the US & is available at www.johnnydelgadoisdead.com, and www.spacedogentertainment.com.

"Engraved" has just been nominated to Fan Favorite category in the "Independent Singer-Songwriter Association (ISSA) Song Contest", Session II,.2008. The Fan Favorite category winner is picked by the fans who can vote between Oct. 1 - 10 @ http://www.issa-music.org.
"Trouble" is a semi-finalist in the Jazz/Blues category in the UK Songwriting Contest 2008! http://www.songwritingcontest.co.uk
Also "Chuckie's Bride" has just been selected as a finalist in the 100% Music Songwriting Contest in the metal/punk category and
"Trouble" is also a semi-finalist in the blues/jazz category. http://www.100-music-songwriting-contest.com
'Engraved" is also on Robbie Tucker's Compilation CD "Musicians Against Parkinsons" http://www.MapMusic.org

Their website is www.myspace.com/leadpipecinch and they are also on www.indiecharts.com. where they held the #1 slot for pop/punk genre from April - June '08. Their songs have showcased and been on rotation on several stations including www.wjfn997.com., www.bananapeelradio.com., Rocklandworldradio.com and http://www.underworldmixradio.com along with several other internet stations.

They enjoy experimenting with all styles of music, yet are able to maintain their very own original signature sound while creating original songs! They are currently competing in their 3rd round in OS National Band Search, sponsored by Sam Ash and Shure Microphones and are playing in NYC, NJ, Boston and surrounding areas. They do not want their music to be "placed in a box and neatly tied" and are writing new songs that explore "funk" and  "progressive rock " along with their other musical styles.

indiecharts.com pop/punk by Top 10 Charts - Pop/Punk
Lead Pipe Cinch is the #1 pop/punk band
broadjam.com/DavidDavis by
Broadjam.com David Bruce DavisNote: Trouble is a MUST listen too song! Deborah and her band are really kicking it. What a talented singer/songwriter and her guitarist is an excellent player!
Rockanagan opens its arms to California, N.Y.C. ba by Sarah Willard, eVent Magazine
"The NYC-based band has a sound that can only be described as original and guitar driven, since the sheer variety of styles utilized is mind-boggling. Think Blondie meets Clapton, Joan Jett meets...