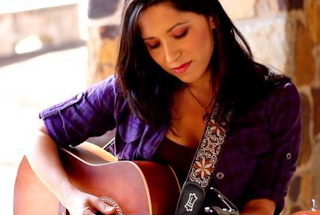 Laura Marie was born and raised on the songs of The Pretenders, The Police and Carole King. She credits her lyric writing habit as the reason for initially dropping out of the University of Texas at Austin. Her first full-length solo CD titled, Drawn was released in 2007 and was co-produced by five-time Grammy nominated producer, Mack Damon. Fans are quickly hooked on her own brand of pop-folk songwriting. Her lyrics are both touching and personal. Laura Marie gets to the heart of the matter with a voice somewhat familiar, yet distinctly her own. Laura Marie was born in and raised in San Antonio, Tx. where she performed and recorded with local bands Sofa Kingdom and Things Between and, in her spare time, did voice over and backing vocal work in a number of local studios. She graduated from St. Mary’s University with a degree in music education and was a grade school choir director before giving in to her compulsive lyric writing habit and becoming a full time musician. Her debut CD, Drawn (2007) was produced by Grammy-nominated Texas music producer Mack Damon. She is currently in pre-production for her follow up CD to be recorded in 2009. Look for a preliminary single due out in late 2008. As a songwriter, she is known for her poignant and striking wordplay (“Wait,” “In Code,” “Still”) while her smooth vocal style has been described as ‘smooth as 100 year-old scotch’. Laura Marie’s music has been favorably compared to songwriters Norah Jones, Natalie Merchant, Shawn Colvin and John Mayer.

Laura Marie writes songs that non-musicians dream of writing by Joseph A Italiano- Skope Magazine
San Antonio-based pop/folk artist Laura Marie writes songs that non-musicians dream of writing.The lyrics will personally touch the listener as if the songs were written just for them. Common life...
Laura Marie is a star in the making by Steve Circeo, Americana Music Times
Even though the music on Drawn stays true to Laura Marie's fairly lean folk-pop sound, this record sounds huge.But, then, I'm coming to expect that from five-time Grammy-nominated producer Mack...
p
A
n
E
F
Song Title by Artist Name
987654d
LM
iAnEAqqqq